Home News Headline News Shutting Down of Oil Production Facilities Will Not Be Tolerated, Gov. Wike... 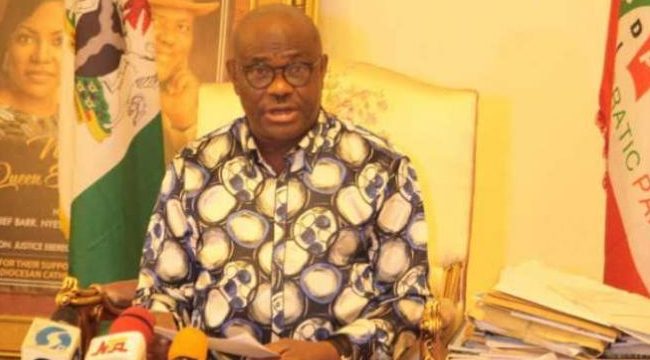 Rivers State Governor, Nyesom Ezenwo Wike, has stated that the State Government will not tolerate shutting down of oil production facilities of operating companies in the state.

Governor Wike said under no circumstances should communities take laws into their hands by preventing oil production companies from working.

He said: “I will not support any company not to carry out their Corporate Social Responsibilities (CSR) to their host communities.

“However, communities must not take laws into their hands. They must not stop production by the operating companies. Such actions will negatively affect the finances of the Federal Government, the state and the local government areas.”

He said in cases where companies fail to act within the expectations of the communities, the State Government will mediate through the Steering Committee on Cluster Development Boards.

“It is important that we do not allow crisis to occur in the communities. The Aeroton rig in one community was seized. That rig should be allowed to work. I called this meeting because of the concerns raised by the operating companies in the area”, he said.

He said the committee will meet at regular intervals to address ensuing challenges, in order to forestall the escalation of conflicts.

He regretted that most problems in the Niger Delta are caused by oil companies who patronise and engage with criminal elements to the disadvantage of the host communities.

In a remark, former Commissioner for Environment, Mr. Samuel Horsfall, said that the oil operating companies know the right thing to do, but they will never take the right steps.

He said that the oil companies have refused to recognise Council Chairmen, who are the direct links to the respective communities.

An official of one of the Cluster Development Board, Mr. Charles Sekibo, denied seizing the rig of one of the oil companies. He said that his community has always provided the needed support for the company to engage in production.

The Managing Director of Aeroton, Mr. Ebiaho Emafo, said that nobody has the right to stop the production of oil companies.