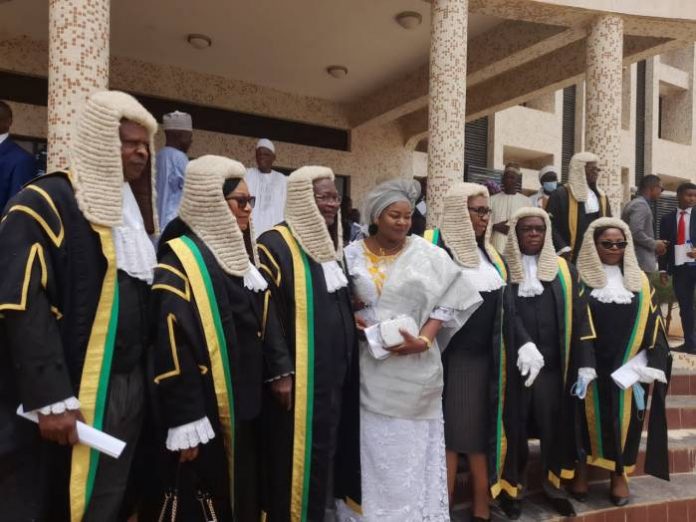 A retiring Federal High Court Judge, Justice Musa Haruna Kurya, has reminded serving judges and lawyers that they will one day give account of their service before the Judge of all Judges.

He gave the admonition during a valedictory court session held in his honour at the Federal High Court, Gombe.

Quoting from the Holy Bible, where a valedictory message by Prophet Samuel declared his faithfulness and sincerity in his service as the judge for the children of Israel for 40 years which ended without blemish, Justice Kurya said his guiding principle during his years in service had been the fear of dying and facing God, to give an account of his stewardship in the judiciary.

Justice Kurya therefore prayed that the serving judges would equally end with praises of clean record in their credit.

She described him as a complete gentle man who is well known for his profound friendly, quiet but revered life style.

She said, “He is one of the Judges who has been loyal to the Judiciary. The Bench and the Bar will dearly miss him for his carefulness and uprightness. This stands as legacy of his dedication to the Judiciary during his time on the Bench of the Federal High Court”.

Justice Pius Akubo who represented the Body of Senior Advocates of Nigeria at the occasion, praised the stewardship of Justice kurya, saying it is not every judge that gets to be celebrated with a valedictory session without a record of blemish to his name.

Also quoting from the Holy Bible, Mr. Akubo said judges were commissioned to dispense justice on earth as God’s representatives but reminded them that they in turn would face Him presiding over them in righteousness and justice for the work He assigned them to carry out on His behalf.

He said valedictory court sessions were a highly cherished tradition of the Court, where judges get to be celebrated for upright judicial service rendered and bowed out in good health, good character and unblemished reputation.

He called on the Government to provide the needed protection for judicial officers to operate without fear, in light of the security challenges being witnessed across the country.

“The wake-up call therefore is that, Government must be alive to its responsibility. Judicial Officers can no longer afford to operate with trembling hands with the fear of the unknown,” said Mr. Akuba.

Justice Musa Haruna Kurya was born on 9th May, 1957 in Ture, Kaltungo LGA, Gombe State. After completing his primary and secondary schools in flying colours, he bagged his LL.B Degree from the Ahmadu Bello University, Zaria in the year 1984 and was called to the Nigerian Bar in 1985.

Justice Kurya began his legal career in the Ministry of Justice under the former Bauchi State as a Pupil State Counsel in 1986 and rose through the ranks. He was appointed Deputy Chief Registrar Gombe State Judiciary in 2007 and later appointed to the Federal High Court Bench in 2012 where he served for ten years in Lagos and Jos Judicial Divisions of the court.