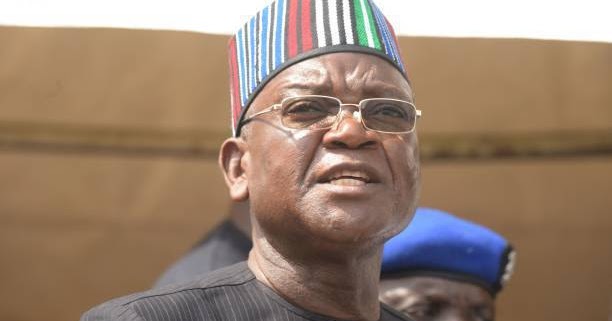 As the nation clocks 61 years after independence, Benue state Governor, Samuel Ortom, has said there is nothing to celebrate as a people with the level of insecurity, bad economic policies and abject poverty being perpetrated by the federal government.

The Governor stated this on Friday while fielding questions from journalists after an interdenominational service to mark the 2021 Independence Day celebration in Government House Chapel Of Grace, Makurdi.

Ortom who described those piloting the affairs of the present federal government as sycophants and mediocre lamented that corruption, insecurity and failed leadership have crippled all spheres of the economy while Nigerians are groaning in the hands of the present government.

While insisting that there is nothing to celebrate, Governor Ortom explained that he would rather call for prayers in Benue so as to celebrate God for sparing the lives of the people and to cry unto Him for a better president of the country in the future.

“Sycophants, mediocres are the ones who are ruling. Corruption has taken over this country and in every sphere of life nothing is happening. So we need to celebrate God for giving us life. Maybe that way, God will give us a better president but for now, I won’t deceive you, there is nothing to celebrate.”

The Governor who flayed continuous killings in Benue state said between 2017 till date, over 100 security men have died while trying to provide security for the people of the state.

He expressed pains on the prolonged stay of Benue IDPs in camps, especially women and children saying this is not the kind of Nigeria we yearned for.

He also commended the security agents in the state for apprehending one of the most wanted militia leaders in the state, Aondofa Kefas, a.k.a Azonto, Gana’s second in command and tasked them to ensure that he is brought back to the state to face justice.

Reacting to the mass resignation of his aides, Governor Ortom said he gave the directive for those who want to contest election to resign to enable them concentrate on pursuing their ambition.

“I told each and every one of them that it is God that crowns so if God anoints you, no one can stop you so they should work with their people. For me, I want to finish very strong and those people who have resigned, I am going to replace them and I expect that they will work for me and the people of Benue state to finish strong and when we finish strong, it becomes easier for whoever that is nominated for any elective post to win the election.

He reiterated that he has no anointed candidate saying “I am not God so I cannot anoint you but anybody who becomes the candidate of my party is my candidate.”