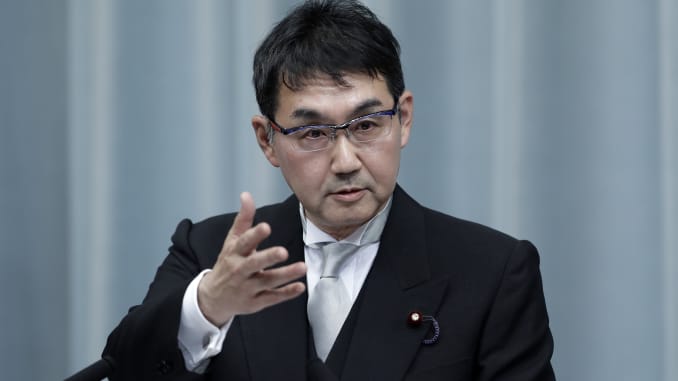 Former justice minister Katsuyuki Kawai pleaded guilty at a Japanese court on Tuesday to a bribery scandal and said he would step down as a lower house lawmaker, local media reported.

At the Tokyo District Court, Kawai, a right-hand man to former Prime Minister Shinzo Abe, admitted that he had paid bribes.

He said the bribe was paid to local politicians and supporters in the western prefecture of Hiroshima in return for securing votes for his wife Anri Kawai in the 2019 upper house elections, Kyodo News reported.

Tsutomu Sato, Chairperson of the ruling Liberal Democratic Party (LDP), told a news conference that Kawai, who was currently still a member of parliament, should quit.

Kawai and his wife Anri, who won the race to become an upper house lawmaker, were indicted in July on charges of violating the nation’s election law by buying votes in the 2019 campaign.

According to the indictment, Kawai, who once served as Abe’s special adviser for foreign affairs, handed out a total of about 29 million yen (267,000 dollars) to 100 local politicians and supporters in return for their efforts to secure votes for his wife.

Most of the 100 people questioned by prosecutors have admitted to receiving the cash.

The LDP injected an unusually large amount of 150 million yen into Kawai’s camp during the campaign.

Anri Kawai was sentenced to 16 months in prison, suspended for five years, for conspiring with her husband. She quit as a lawmaker in February. (dpa/NAN)