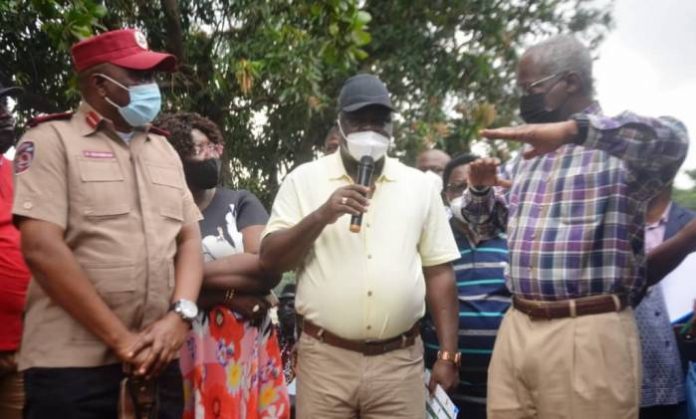 The Minister of Works and Housing, Mr. Babatunde Fashola has extended the Right of Way (RoW) evacuation deadline, for mechanics operating under Berger/Kara Bridge, Lagos-Ibadan Expressway, to Nov. 30.
Fashola extended the ultimatum, at an inspection of the bridge on Thursday in Lagos.

He lamented that the technicians, operating under the auspices of the Nigeria Automobile Technicians Association, (NATA), Ojodu Abiodun branch, defied an initial evacuation order in January, to regroup at the location.

He warned that government would be left with no option than to enforce the law, if they defied the new order.

He added that ongoing rehabilitation/reconstruction of the highway, would soon extend under the bridge, in addition to the coming Ember Months repairs by the ministry.

The minister said activities of the mechanics often caused damage to the roads and bridges, stressing that ongoing construction work along the Lagos-Ibadan expressway would soon extend to the axis.

“We gave you notice to evacuate this place and look for new location.

“This is not the right place to carry out your trade, it is not safe for you and also not safe for the infrastructure,” he said.

Responding to appeals for alternative space, Fashola advised the association to officially engage the Ogun government to make the request, promising to help them fast track the process.

He educated the mechanics on dangers of their activities, constituting road abuse and damage, costing government huge revenues to fix.

The General Secretary of NATA, Mr. Nurudeen Sonibare, had earlier appealed that the Federal Government should provide alternative location for the over three hundred workers at the site, to ply their trades.
(NAN)