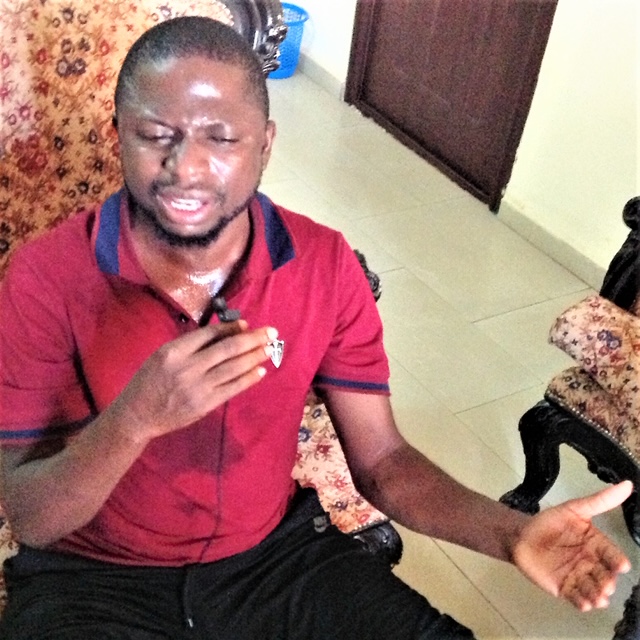 Comrade Oloko Ralph Ogbaji was a governorship aspirant in Benue State in 2015 under the Peoples Democratic Party (PDP). Ogbaji, a former Special Assistant on Ethics and Values in the Office of the Special Adviser to ex-President Goodluck Jonathan on Ethics and Values, in this interview with SIMPLE IKEM, spoke on the recent #EndSARS protests and why he wants to rule Benue State come 2023. Excerpt:

TNE: How do you see the recent #EndSARS protest?

#EndSARS is an unfortunate issue that has given us concern as citizens in Nigeria, the most populous black nation in Africa. I have expressed my opinion times without number in several media. I have warned the country and the leadership before. We foresaw these threats to Nigerian existence and we advised appropriately. Unfortunately, our advice was ignored by those who had been holding this country down. You can name presidents, the ministers, the senators, the House of Representatives members and the governors and other persons that have held political appointments or elective positions since 1999 till today. Even from the colonial era till date, only just a few Nigerians are opportune to govern this country and they have failed to do the right thing.

So, the nationwide protests by the youths were consequences of doing the wrong things in governance. As an individual, I have been shouting, crying over this. I have advised that the leadership of this country should look at the issues – the injustice – and ensure that the right thing was done. But, they turned a deaf ear. But, let me warn that these protests are just minor consequences. My fear is that we may experience more protests between now and 2023 due to the failure of the system. It is systemic failure that gave rise to a restive society.

TNE: You said the #EndSARS protests were system failure. Could you expantiate?

Yes. We have been running governments without accountability. We cannot continue like that. You cannot have people in the helm of affairs, entrusted to oversee the nation through the people’s mandate and franchise and they are not concerned about the welfare of citizens. What are the key elements of government? One, carry people along; the welfare of the people; the security and lives of the people and their properties. Are all these being done by our leaders? The answer is no.

TNE: In other words, are you saying that you supported the #EndSARS protests ?

Yes, I supported the move by Nigerians, by the youths. The youths should be the major focus of the country as in other parts of the world. I therefore supported the move. However, it should have been approached with due diligence and sense of responsibility. If the government cannot raise its eyes to what the demands of the people are, the demand of the women, the demand of the men, then, they should expect more of these protests.

What does it take the president to write his name in the Guinness Book of Records? He seems to value killings more than responding to the most basic yearnings of the people. With due respect, Mr. President should sack the Service Chiefs, as being demanded by the people. But, he refused. The military destroyed the national value system for their personal aggrandizement and enrichment. Go to some of their farms, they have moved from stashing their money in foreign banks, or looting Nigerian money through the banks because of BVN and Single Treasury Account. Are we fools? No, we are not fools. When you push the child to the wall, he will bounce back and bite you. That was what happened through the #EndSARS protests. Unfortunately, some of the youths who were not part of the real protesters caused anarchy and pandemonium across the country.

TNE: If you were Mr. President what would you have done to stop the protests before things got out of hand?

The solution is simple. Listen to the people. The youths form the majority of Nigerians, a country of over 200 million people. The president has not been listening to Nigerians. He listens only to a few persons called the kitchen cabinets, the cabal. I wonder why our leaders cannot learn. I have said it many times over. Sack the Service Chiefs first; sack the people who are not performing in your government; unite Nigeria, make it one nation; think Nigeria first. Why are you placing the appointees above Nigerians? Major appointees are from northern Nigeria, mostly Muslims. I will not complain if they are Muslims and are performing. But, the president’s appointees are not performing. Let Mr. President sack these people. Then, we can talk about Nigeria.

TNE: What are your final words on the #EndSARS protests?

I want to appeal to the Federal Government, especially the president to look inwards and write his name in the Guinness Book of Records. Let Mr. President listen to the people. He should look at the people on the streets, those who are helpless. Are they not more than his cabinet members? He should look at the youths. They are more in number than the ministers and the Service Chiefs. A lot of Nigerians are unemployed presently and that is bad. Mr. President should listen to the people’s cry. If he cannot solve all the national problems, he should tackle the major ones. Mr. President should look inwards with passion. The situation in the country now is threatening the existence of Nigerian. I am calling on Mr. President to listen to the people. The people have long passed a vote of no confidence on his security agents. The time has come for him to change them.

TNE: In 2015, you aspired to be governor of Benue State. You later attempted to vie for the chairmanship of Oju Local Government. What is your dream for the people of Benue State?

As a young man, my interest is the development of the state. My interest is to build a virile society, a society where things work. I have seen a lot of endowments in Benue State. I am in the quest to lead this state. I am in the quest to be at the helm of affairs. The River Benue is enough to make a Benue of my dream. I have been to many countries in the world. I have seen what those countries make of their endowments. Go to Dubai, go to Israel, go to the UK, US, Sri Lanka, etc. Many of these countries are not up to our country. I travel in the sea in the Niger-Delta. I travel on the land to Yobe and Borno states often, to Zamfara. Anywhere I go, I see fertile land, the God-given resource.

The Chinese are mining our gold, our water is wasting, and our mountains are wasting. No one is thinking towards changing those things to take us to Promised Land. I have this bitterness in me when I see these things wasting. Come to Tiv land, you will see oranges wasting. Go to Idomaland, go to Igedeland, the story is the same. What else would motivate me? What else would provoke anger in me? Benue is not working.

I want to change Benue State for good. That is why I am ready to give my life for Benue. I am ready to make things work. I can make River Benue a home of attraction, a home for tourism. If care is not taken, in the next five years, the river Benue will consume every house in Makurdi. Why? This is because there is no drainage. Benue can give us whatever we want in Nigeria.

TNE: How do you see the on-going strike of members of the Academic Staff Union of Universities (ASUU)?

On the ASUU strike, although I am not happy with the management of the universities, I advise Mr. President to set up a body to monitor and evaluate the university system. He should look at the complaint of ASUU and release funds to the institutions to end the strike. One of the reasons the #EndSARS protests succeeded was the protracted ASUU strike which made the students to be idle when they should be in their universities studying.

TNE: What would you have done differently in Oju LGA of Benue State if you were elected the council chairman?

I came in as a Local Government chairmanship aspirant and subsequently became a top contender in that election. I did not come to take. I came to add value to the people of Oju, my primary constituency. But destiny could not place me on that position and I congratulated the consensus candidate in person of Hon. Clement Onaa. I congratulated him and called on my supporters to work with him because I did not come out due to personal interests, but the interest of the larger people of the Oju LGA and to fix Oju. My slogan was, ‘I come to give, I do not come to take, I come to add, but I do not come to subtract.’ Here we are today, the young man assumed the office. Even though we consulted each other, I shared my blueprint with him. First, carry the stakeholders along; the elders, the women, the youth and make sure that in your quest to govern the Oju LG, do the needful to produce a lasting legacy.

My blueprint is still alive. I told Oju people that if I win the ticket of the Peoples Democrtaic Party (PDP), my party, I will start my project right there. Although I did not win or become the LG chairman, my blueprint cannot die. I started making myself a realist before the people. I started my project at the point of not being the chairman. Go to Oju, I don’t need to say, they cried to me. My plan, according to my blueprint included making the LG safe, construction of the culverts and peace building. I am still on with my vision and dream.