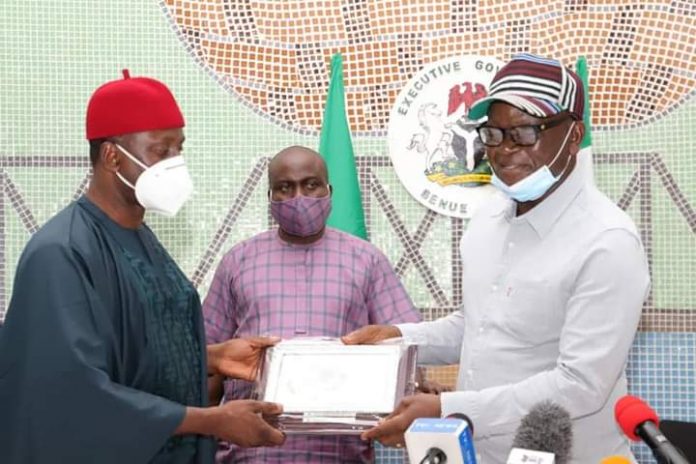 The Federal Government has called for the support and cooperation of Benue State Government to accelerate the development of the solid mineral sector.

Minister of State for Mines and Steel Development, Mr. Uchechukwu Ogah made the call at the Government House, Makurdi, on Thursday during his working visit to Benue.

He intimated that he was in the state to appraise the Governor of the vision and policy focus of the Federal Government for the development of the nation’s mineral resources and “to solicit for the support and cooperation of your Government in accelerating the development of the huge commercial deposits of Barite, Coal, Limestone, Lead/Zinc and other mineral resources occurring in Benue State.

“The third objective is to sensitize mining operators and stakeholders on the need to conduct their mining operations in a safe, convinient, orderly and environmentally friendly manner consistent with the provisions of the Nigerian Minerals and Mining Act, 2007 to yield the desired mutual economic benefits to the operators, host communities, State and Federal Governments.

He further disclosed that during his visit to the state, he also plans to hold interactive townhall meeting with mining operators and other stakeholders operating in Benue State, visit the Ohechema and Chairman, Edumoga Traditional Council in Okpokwu LGA where communities hosting Coal mining activities have raised alarm and complained about the pollution of their source of water supply by coal mining activities in the locality.

The Minister will also inspect Messrs Dangote Coal Mining activities and facilities in Effeche community in the state.

He noted that the President Mohammadu Buhari administration’s vision is to build a prosperous economy, eradicate corruption and provide security for all and in pursuing this vision, the Federal Government is implementing policies aimed at diversifying the nation’s economy away from dependence on Oil to Mining and Agriculture.

Mr. Ogah said the federal government is seeking the support and cooperation of Benue state government in the areas of enhancing revenue generation from mining operations due to the Federal Government from which the State Government enjoy statutory allocation and 13% derivation.

He also said the federal government wants the state government to assist in providing support for the activities of the State Chapter of the Mineral Resources and Environmental Management Committee (MIREMCO), the majority membership of which are drawn from the State Government, by supporting the creation of conducive environment for boosting mining operations and businesses in Benue State.

According to him, sustaining the mutual synergy will lead to increase in revenue, creation of employment opportunities for the teeming unemployed youths and economic empowerment of host mining communities which will lead to reduction in poverty level of rural communities.

He commended Governor Samuel Ortom for the successes he has achieved in restoring peace to Benue State and for the legacy projects his Government initiated and is implementing for the benefit of the good people of the people.

He stressed the need for both the Ministry and the Government of Benue State to cherish and sustain their mutually beneficial partnership so that they can transform the rich mineral endowment of Benue State into wealth for the peace and prosperity of the good people of the State in particular and Nigerians at large.

Responding, Governor Samuel Ortom pledged his commitment to support Programmes and project of the federal government that are people friendly.

He said developing the mining sector of the state is an opportunity that can put smile on the faces of the Benue people and pledged his total support.

He therefore thanked the federal government for supporting the state with security, appealing that the state should be carried along in issuing of mining licences.