Home Editorial Why did FG lie to IPI? 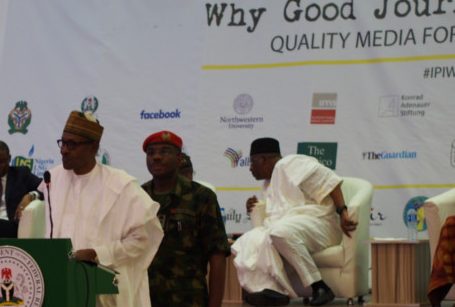 It is curious that in this age of the big data, only public information managers of the current administration in Abuja still do not realise that the era of propaganda and lying with statistics and data was actually interred with the bones of Adolf Hitler and Paul Joseph Goebbels, the Nazi politician and Reich Minister of Propaganda of the Nazi Germany of the World War 11.

This is the crux of a recent cover-up by the Federal Government in Abuja when a global Vienna-based world journalism body, the International Press Institute (IPI), demanded release of a journalist who has been in the Department of State Services (DSS) detention for two years.

The IPI, a global body of journalists, which seeks to promote press freedom and protection of journalists all over the world had during its Congress under a theme: “Why Good Journalism Matters” in Abuja last month, among others demanded release of a journalist, Jones Abiri, at the State House banquet hall in Abuja where Nigeria’s President Muhammadu Buhari declared it open on June 21, 2018.

But curiously, instead of telling the truth, Nigeria’s Information Minister, Mr. Lai Mohammed, who was at the opening ceremony was to later cover up the detention of citizen Jones when he told the nation and IPI that no journalist was in detention in Nigeria.

He had added a curious rider that after a thorough investigation from all security and intelligence departments of the federal government, there was a case of somebody “who had been a guest of the State Security Service.”

The Information Minister specifically told the nation in the presence of the President that the detained person was not a journalist, after all.

The victim was first named as Clement (instead of Jones) Abiri. And the state complicated the matter when it described the detained and guest of the DSS as a “pipeline vandal.”

What is more curious, the embarrassing cover-up by the Federal Government was reinforced the following day by one of the pillars of IPI in Nigeria, Alhaji Ismaila Isa Funtua, publisher of a defunct newspaper, The Democrat, which ceased publication more than two decades ago.

Incidentally, Alhaji Funtua is still the chairman of the Governing Council of the premier journalism training institution, Nigeria Institute of Journalism (NIJ) the same IPI helped to establish in Nigeria in 1963 when Alhaji Lateef Kayode Jakande, then a journalist, was in charge of the local chapter of the same IPI.

What was more scandalous, while one government official covered up at the opening ceremony at the State House, Abuja and another non-governmental person, an official of the IPI reinforced the lie at the Transcorp Hilton Hotel where the plenary took place, no independent journalist could challenge the big cover-up throughout the weeklong programme of the IPI.

This is a development, which reinforces a recent observation in a section of the media that indeed, independent journalism has a serious challenge in Nigeria at the moment.

How else can the IPI local chapter in Nigeria, which played host to a very successful annual congress describe its silence over the big cover-up by government on alleged detention of citizen Jones during the sessions of the same congress where the same IPI honoured Doha, Qatar state-owned Al Jazeera global cable television, for courageously upholding freedom of the press and human rights in its organisation where some journalists have been held by the Egyptian authorities.

Besides, the same IPI in a closing statement in Abuja had demanded probe of death of three Nigerian journalists last year.

At the IPI General Assembly in Abuja, the body urged the Nigerian government to expedite investigations and bring to justice, the killers of three Nigerian journalists in 2017.

IPI’s request was among the four resolutions unanimously passed by the global network of editors, media executives and leading journalists at the end of the 67th IPI World Congress in the nation’s capital.

The IPI also urged action on press freedom issues in Africa and Turkey.

Their deaths are still under investigation just like many others by the authorities.

Giobaro was shot dead on April 16, 2017, while Okojie was shot dead while returning from work on July 8, 2017. Onubogu, a camera man, was found dead four days after he was reported missing on November 12, 2017.

Again, even journalists and their professional bodies in the country have not been following up on the mysterious deaths of the three journalists until the IPI Congress last month in Abuja.

IPI said it was disturbed by the killing of several journalists in Africa in apparent retaliation for their work in recent years.

The origin of citizen Jones plight: In the past two years, the DSS has rebuffed all efforts by Jones’ family, lawyers, journalists and civil society actors to get any information on him.

With emotions only a mother could express, Mama cried in the native Ijaw language of the Niger Delta creeks.

Mama was calling on Nigeria’s President, Muhammadu Buhari, to feel her pain and hear her plea:

“Please, I am begging. Please, pity me. Anyone that is holding my son, please release him for me,” Mama cried.

“I gave birth to him. I breast-fed him. I know my son. He is not a militant. He is not a criminal. He is a journalist.”

For almost two years, Abiri has not been seen nor heard from. Married with a wife and five children, Jones would have celebrated his 50th birthday on June 4 this year.

Jones was a 300 Level student aspiring for his first degree in Law from the National Open University of Nigeria (NOUN).

All that tall ambition and his right to education is lost; he is fighting for his freedom and even his life, now!

Incredibly as it may sound, citizen Jones remains in a state of forced disappearance as the Nigeria’s Secret Service authorities, have detained him for more than 700 days without trial, and without access to his family, lawyers and doctors.

Under international human rights law, a person is a victim of (en)forced disappearance if detained by state authorities or a third party with the authorisation of the state, followed by a refusal to acknowledge the person’s whereabouts and condition in a bid to deny the victim the protection of the law.

On July 21, 2016, a dozen heavily-armed agents of the self-styled Department of State Services arrested Jones, then publisher of Weekly Source, outside his office at 288 Chief Melford Okilo Expressway, Yenagoa, Bayelsa State.

Eyewitnesses said the SSS agents, who came in three cars, did not produce a warrant before handcuffing him, raiding his office, and taking him into custody.

John Angese, the chairman of the Nigeria Union of Journalists (NUJ) in Bayelsa State, in an interview in March 2018 had recalled how at gunpoint the DSS threatened everyone, including journalists, not to cross a parameter line.

The DSS spent hours searching Jones office before carting away his computer and documents, sealing his office, and taking him handcuffed into custody.

“I was personally there when he was taken away. I tried to ask what was the problem and I was rebuffed with their guns. I was threatened with a gunshot if I came any closer. Everybody was scared,” Angese recalled.

Two days after his arrest, the DSS on July 23, 2016 released a statement alleging Jones is a militant named General Akotebe Darikoro, operating under the nom-de-guerre ‘General Kill and Bury’, the leader of the Joint Niger Delta Liberation Force, “which has been furthering separatist tendencies in connivance with other criminal gangs in the Niger Delta region.”

The DSS said Jones “confessed and owned up” to vandalising and bombing oil pipelines belonging to international oil companies, Agip and Shell in early July 2016, sending threat messages to management of both oil companies demanding a total of N750 million payment, threatening to launch missile attacks against the Presidential Villa and selected targets in Abuja, and masterminding the rumour in 2016 that the military was planning a coup against Buhari.

Weekly Source, a local tabloid which operated by mostly sourcing and publishing critical stories of the government culled from online and national newspapers, had in its last edition dated July 10, 2016 published as its lead story originally published by the online pointblanknews.com titled ‘Rumble In The Military: Inside The Coup Plot Story… Militants’ Warning Alters Plot‘.

The story elaborated an alleged conspiracy that top military officers working with politicians had approached the JNDLF militant group to intensify bombing pipelines as a justification to overthrow President Buhari. The military denied the allegations.

Jones’ magazine, the Weekly Source in the same edition published another story sourced from pointblanknews.com on how President Buhari’s loyalists, including the director general of the DSS, were blocking investigations into an oil and gas company implicated by the anti-graft Economic and Financial Crimes Commission (EFCC) in siphoning billions of dollars in fraudulent oil deals.

The story claimed that the company had donated heavily towards Buhari’s 2015 presidential campaign through loyalists.

With these cloud of witnesses and circumstances, how did the authorities in Nigeria claim to the IPI in this time and age that Jones, a publisher of a local magazine was not a journalist and so had been detained because he was a suspected ‘pipeline vandal.’

The whole Jones’ saga is a reproach to the Nigerian press and indeed a blight upon the human rights record of the Buhari administration.

So, citizen Jones should be released today or charged to court.