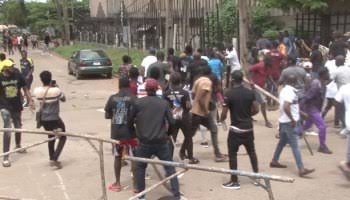 The General Manager of Edo Waste Management Board, Mr. Charles Imariagbe, says the state government has embarked on a clean-up exercise across the city after the #EndSARS protest.
Imariagbe who monitored the clean-up exercises in Benin on Saturday, said the exercise would keep the state clean from rubbles and debris of the bonfire of the #EndSARS protest.

He said that the clean-up exercise was being done as normalcy had returned to the state.

According to him, we are going round all the streets and the major roads blocked with bonfire.

“We are here on a clean-up exercise of the remnants and debris of the bonfire made by the #EndSARS protesters.

“I want to commend Edo State youths and the Commissioner for Youths who joined us in the clean-up exercise of the major roads as we also went through the inner roads.

“I appeal to the youth not to set bonfire again on the roads as it will have an adverse effect on the roads.

“The exercise will take several days as the bonfire is much and scattered across the state,” Imariagbe said. (NAN)