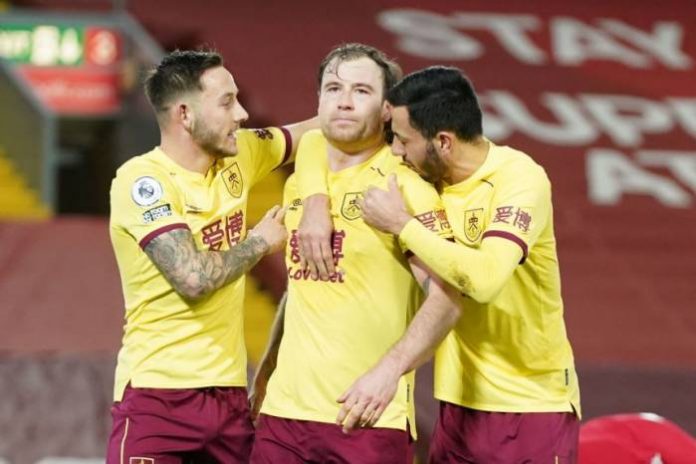 Champions Liverpool suffered a shock 1-0 defeat to lowly Burnley on Thursday, ending their 68 match unbeaten home record in the Premier League as their title defence continued to fade.

An 83rd minute penalty from Ashley Barnes, after he was brought down by goalkeeper Alisson Becker, decided the contest after Juergen Klopp’s side failed to score for the fourth straight league match.

Liverpool have not won for five games in the league and trail leaders Manchester United by six points, in fourth place.

It was Burnley’s first victory at Anfield since a 1-0 victory in September, 1974 and Sean Dyche’s side were rewarded for a superb defensive display.

Divock Origi had struck the bar for Liverpool in the first half, with only Burnley keeper Nick Pope to beat and Roberto Firmino missed a good chance after the break.

But for all their pressure and 73% possession, Liverpool struggled to create real openings with Ben Mee and James Tarkowski outstanding in the centre of Burnley’s defence.

When Liverpool did manage to find space for a shot, Burnley keeper Nick Pope was up to the test, getting down well to keep out efforts from Trent Alexander-Arnold and substitute Mohamed Salah.

But too often Liverpool drifted in poor crosses which were easily dealt with by Burnley’s defence.

The Clarets, who made a poor start to the season, move up to 16th place on 19 points. (Reuters/NAN)