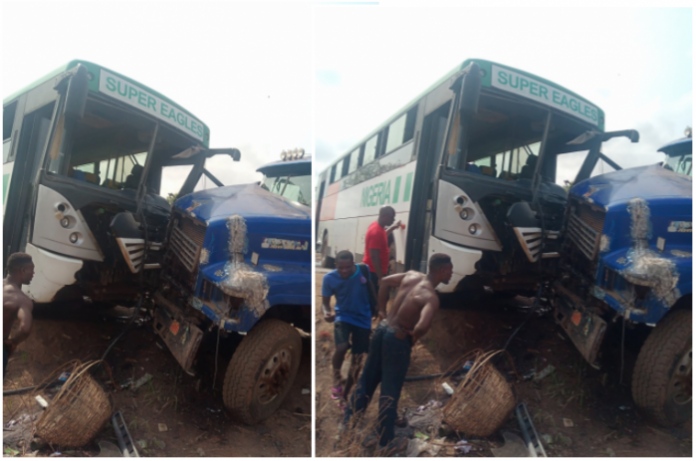 The bus conveying players and officials of Akwa United Football Club of Uyo on Friday in Enugu had a crash along Enugu-Onitsha highway, but no life was lost.
The News Agency of Nigeria (NAN) reports that four players and two officials sustained minor injuries.
They were immediately taken to Enugu State University of Science and Technology Teaching Hospital at Park Lane in Enugu for treatment.
Later on, men of the Enugu Sector Command of the Federal Road Safety Corps, removed the accident vehicles from the accident scene to their office at the New Market in Enugu.
NAN reports that, when a correspondent visited the hospital, club striker Ndifereke Effiong was being attended to, while the assistant driver and assistant coach were also receiving treatment on bruises sustained.
Speaking with NAN at the Park Lane Hospital, Rangers International FC’s Team Manager, Amobi Ezeaku, sympathised with the Akwa United team and thanked God for their lives.
“On behalf of Rangers International FC led by Davison Owumi, the General Manager, I sympathise with the management of the club over this unfortunate incident.
“I first of of all thank God for preserving the lives of the players and officials because the accident was not an easy one.
“I have seen the players and officials. They are all stable and everything is under control.
“We cannot take away the fact that our roads are now a death trap and an accident of this nature can claim lives,” he said.
READ ALSO:  Big Girl, Small god!
Ezeaku thanked God that the players and officials sustained only minor injuries.
He said the rate of accidents on the roads involving clubs in this new season is worrisome.
“We must find an easier way of making trips to away matches to alleviate the plight of players and officials on road transportation.
“Bad roads, banditry and other vices are issues to tackle. I believe that the League Management Company (LMC) should look into the plight of road travelling.
“Club owners are not left out of this and they need to be sensitive to this situation and I hope that in the future, trips to matches will be made easy.”
Ezeaku suggested that any trip which take up to six hours should be by air or rail depending on the connectivity between the two clubs’ base.(NAN)