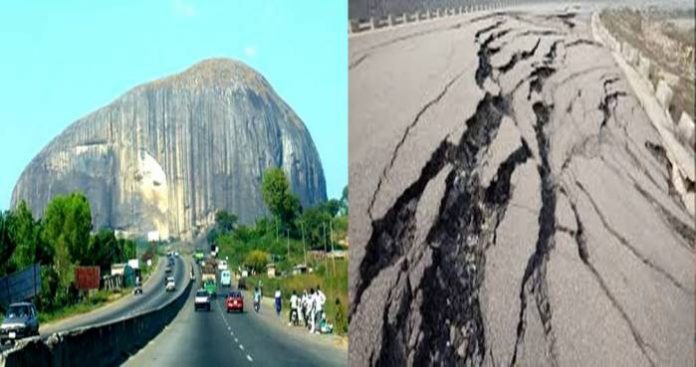 The Nigeria Geological Survey Agency has called on the public to disregard reports in some quarters that there was an earth tremor in some parts of the Federal Capital Territory (FCT).

Dr. Abdulrazaq Garba, the Director-General of the agency, made the clarification while speaking with newsmen on Saturday in Abuja in reaction to a Friday report.

He said that as a scientist, the author of such report should come forward with facts, if any, to enable the agency brainstorm with him and possibly agree or disagree with such claims.

“So far, from our records and equipment, there is no record of earth tremor within the FCT.

“Our belief is that the author of the publication, with all the information he has, should come forward to the agency as it is done in other countries.

“By doing this, we can compare notes and look at the data and then access and evaluate it and know if there was actually an earth tremor in those areas,” Garba said.

He added that while the author of the information said the tremor happened in Abaji and Gwagwalada areas of the FCT, the agency had no such report.

“We have a station in the University of Abuja in Gwagwalada, and the officer in charge who heads the University’s Physics Department has said there was no such record.

“We even question people around Abaji and Gwagwalada and there was no report of such, unlike before when we will receive calls from people when such thing happened,” he said.

The director-general recalled that when there was a blast by some miners sometimes in the past within the FCT, the agency was inundated with calls from concerned individuals who wanted to know what was happening.

He maintained that, so far, the agency had not received any report on the claimed tremor apart from the one put forward by the author.

READ ALSO: While Unleashing Terror on Artisanal miners in Niger Delta, FG Set to Buy Gold from Illegal Miners in North, others

Earlier, Mr. Kaka Imam, a Deputy-Director in the agency’s Department of Geophysics, said that for a tremor to be recorded, it must be captured in at least three of the agency’s Earthquake Monitoring Centres.

According to him, the centres which he said works round the clock, has the capacity to capture any tremor within the FCT and the country generally.

He also said that the agency had equipment that notifies it whenever there was a deep vibration anywhere in the country.

He further explained that once such vibration was over and above the established threshold, it was recorded by the equipment and actions were taken if it was significant.
He said it was only when a tremor was captured in at least three well-spaced centres, that it would be precisely said that a tremor occurred.

He said that the agency had such centres within its headquarters at Utako area of the FCT, at the University of Abuja in Gwagwalada, Bwari, and another in Keffi, Nasarawa State.

He said that if there was any tremor of significant consequence, the centres would have captured it and its depths.

Imam, therefore, restated that the speculations that a tremor happened in Abuja and was captured in Ile-Ife, Osun, should be disregarded by the public.

According to him, for such tremor to be captured in Ile-Ife, the vibration will have been felt by Abuja residents.

“We have checked our equipment and none captured the purported tremor. In essence, our equipment has not registered any tremor,” Imam said.