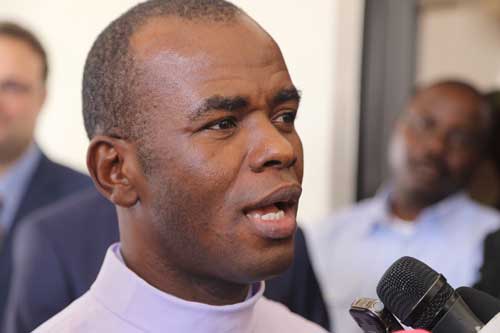 The Catholic Diocese of Enugu, yesterday, said that it banned its members from attending “all religious and liturgical activities” at the Adoration Ministry of Rev. Fr. Ejike Mbaka, following persistent disobedience to canonical laws by the priest.

The Catholic Bishop of Enugu, Callistus Onaga, said in a statement that Mbaka had continuously flouted the church’s rules, stressing that it would no longer condone the cleric’s excesses.

Mbaka, it would be recalled, became a subject of ridicule recently when he incited Nigerians against the candidate of the Labour Party, Mr. Peter Obi, a development that the church frowned at.

He told his members to vote against Obi in the forthcoming election as according to him “he is stingy and wicked.”

Disappointed by the negative reactions that trailed the action of the priest, Onaga banned Catholics and its priests from attending the Adoration Ministry.

The church said stressed that Mbaka’s preachings were no longer in sync with the doctrines of the church.

Onaga frowned at happenings in the Catholic Adoration Ministry Chaplaincy, Enugu that are capable of undermining the Catholic faith and teachings.”

He said that “after several fraternal corrections and admonitions to Fr. Camillus Ejike Mbaka, the Chaplain of the Ministry” as well as “having given him pastoral directives and guidelines for the Ministry Chaplaincy, which he persistently violated, in fulfillment of my pastoral duties as the Chief Shepherd with the obligation to promote and safeguard the Catholic faith and morals in Enugu Diocese, I hereby prohibit all Catholics (clergy, religious and lay faithful) henceforth from attending all religious and liturgical activities of the Adoration Ministry until the due canonical process initiated by the Diocese is concluded.

“I enjoin all the Christian Faithful to keep praying for Fr. Mbaka and the Catholic Diocese of Enugu as I entrust him and the Diocese to the maternal care and protection of the Blessed Virgin Mary, Queen of the Apostles.”

Mbaka had on Friday apologised for his utterances against Obi. He had also blessed the ambition of the politician, stressing that he did not set out to malign him. (The Guardian)