Home Sports ‘We Have To Start Lifting Trophies,’ Says Maguire 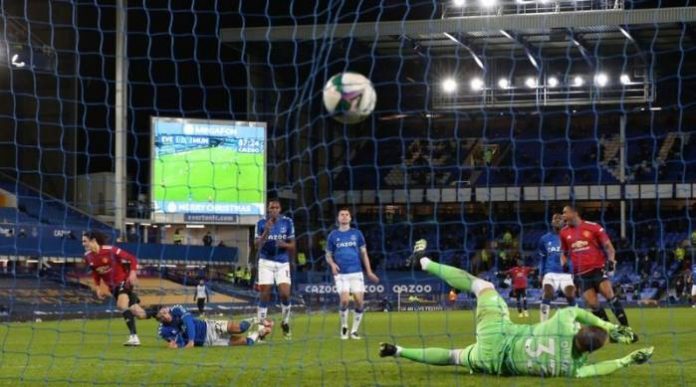 Captain Harry Maguire said Manchester United “have to start lifting trophies” after they set up a Carabao Cup semi-final against rivals Manchester City with a late win at Everton.

United’s last domestic silverware was the League Cup in 2017 and they are within one game of another final after Edinson Cavani and Anthony Martial broke Everton’s resistance at Goodison Park.

Cavani’s stunning curling effort from 20 yards opened the scoring in front of 2,000 fans, just as the game looked set to head to penalties.

With Everton chasing the game, substitute Martial added a second in stoppage time to send Ole Gunnar Solskjaer one step closer in his attempts to earn his first trophy as United boss.

“We are expected to win trophies,” said Maguire. “It’s important to reach these big games but we have to start winning them and lift some trophies for this club.

“It was an excellent performance and we should have been out of sight, we had three or four great chances. We need to be more clinical.”

Everton were lacklustre in the second half, after Richarlison went off injured, having promised much in the first period, with Gylfi Sigurdsson’s free-kick testing Dean Henderson.

Defeat for Carlo Ancelotti’s team ends a run of three successive wins which has lifted them to fourth in the Premier League table.

United continued their upsurge over the last month with a victory which means they have now won all nine of their domestic away games this season – a run which has seen them go third in the Premier League table with a game in hand on their rivals.

Despite making nine changes to the team which beat Leeds on Sunday after going 2-0 up inside three minutes, Solskjaer’s side began with a similar intensity but could not find a breakthrough against an Everton team whose defence has improved in recent games.

In keeping with their 3-1 at Goodison last month, Fernandes was at the heart of their endeavour and in Cavani, they had a striker with a keen eye for goal despite missing the last few games through injury.

It was an eventful night for the former Paris St-Germain forward, who joined United in October.

Having tested Everton keeper Robin Olsen early on, he was then involved in an off-the-ball incident with Yerry Mina where he appeared to grab the Everton defender. Without the use of VAR until the semi-finals, neither player was punished.

There were also chances for Mason Greenwood and Paul Pogba but once Everton found their feet midway through the first half, United found it hard to break down their opponents.

With the game petering out in the second half, Solskjaer sent on Marcus Rashford and Martial in search of a goal, but neither appeared to provide a spark.

That was until Martial found space on the counter attack to feed Cavani, who cut inside Ben Godfrey and found the bottom corner with a rasping strike for his fourth of the season.

With Everton committing players forward to take the game to spot-kicks, they allowed United to break twice more with Fernandes hitting the post on one surge before Martial finished a slick move for his fourth of the season too.

Having slipped up in three cup semi-finals last season, Solskjaer said he was “desperate” for silverware this campaign, and his side are showing signs they could win a first trophy for the club since their 2017 Europa League triumph.