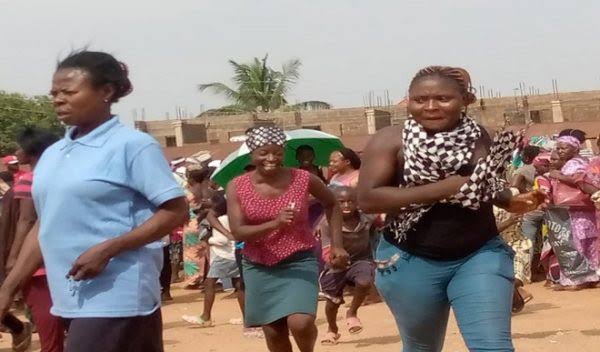 Residents of Narayi area of Kaduna have swooped over foodstuffs meant to be distributed to vulnerable people in the area, with members of the committee responsible for the distribution looking helplessly.

News Agency of Nigeria (NAN) reports that the foodstuffs were being distributed by the Kaduna State Government to cushion the hardship facing indigent people as a result of the lockdown over Coronavirus.

Garba, who is also the Village Head of Narayi, told NAN on Tuesday in Kaduna that a rowdy crowd of young men and women swooped over the foodstuffs and carted it away.

He listed the food items as 170 cartons of spaghetti, and 1,250 cartons of indomie, 650 and 230 small bags of about three measures of rice and beans, as well as 800 gallons of vegetable oil.

He explained that in the spirit of transparency, the committee offloaded the items at LEA Primary School Narayi, but shortly after that, a massive crowd of women and children, majority of whom were young and agile youths flooded the venue to collect their share.

He said that problem began when the committee became divided over the modalities to adopt in distributing the items, with everyone insisting on his idea.

The village head said that while the argument persisted, some of the community members began handing over the food items to their families and friends.

“We were distributing the foodstuffs, one item each to every beneficiary when we lost control of the crowed and boom! The exercise became free for all.

“We did the best we could, but we were overwhelmed by the massive crowd of hungry people who want to get a share at all cost,” he said.

He added that members of the Civilian Joint Task Force, who were there to provide the needed security and ensure successful distribution of the items, also joined in the struggle to get their share.

“I am glad that no life was lost,” Garba said.

Reacting to the allegation, one of the leaders of the Civilian JTF, Mr. Silas Kure, said he was not aware of the involvement of his members in the brawl, but said that the allegation would be investigated.

Also, Mr. Yusuf Goje of Kaduna Social Protection Accountability Coalition, described the development as very unfortunate, and said the situation would have been prevented with good planning and proper coordination.