The actor who took to his Instagram to share new photos of himself expressed gratitude to God for attaining such a milestone.

The actor said he was overwhelmed, appreciative and grateful with the shower of love from fans, well wishers and colleagues in the entertainment industry.

Media executive Mo Abudu, who took to her Instagram page @moabudu showered heartfelt words of prayers on RMD and wished him a happy birthday celebration.

Abudu,  in the video she prayed for more success in RMD’s professional and personal life.

She noted that after checking out the actor’s Instagram page and she could tell that RMD is truly living his best life and prayed for him to continue to do so.

The video was also accompanied with short showered accolades on RMD as she wrote:

“You are loved by me and so many.

Also celebrating RMD, veteran actress Mrs Joke Silva in the post on her Instagram page, reminisced on how far they had come together, appearing in the same stage plays as well as recent movies. 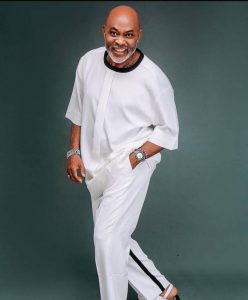 According to her, they both appeared in the same productions date far back as 1993 (28 years ago).

The actress also thanked the celebrant’s wife, Jumobi in her post, saying that without her, the RMD of today would not be possible.

“The one and only Richard Mofe Damijo.RMD. In 1993, you played my priest in the King must Dance Naked(stage) in that same year you played my father in the Musical Holy Child (stage).

“94 you played my love interest in Lion and the Jewel(stage), my son in Violated (film) and Idia (stage). My husband in a Husbands Wife(stage) and Namatse Wahala (film).

“Consumate actor, but more importantly good friend. You have shown us 60 is just the beginning. Enjoy your new season. Jumobi thank you. Without you our RMD of today would not be possible,” she wrote.

Similarly, Actor Denola Grey who described RMD as ”The Best TV Dad”  wrote: “Today is Papa’s 60th. Thank you for being not only incredibly kind, warm and firm, but also humble and hilarious.

“Thank you for checking in when you do, for looking out for me and for being the best TV Dad in the world. Happy birthday Dad.”

Actress Mercy Aigbe wrote on Instagram, “So RMD be giving some major Sugar Daddy Vibezzzz! This pappy has refused to age!

Another actress, Kate Henshaw wrote, “Bros of Brosses dem!! Who dey breeeet? 60 whaaaaat??!!!! Forget abeg, age ain’t nothing but a number when you are living your life truly on your own terms!!.

“May God continue to honour you and be gracious unto you all the days of your life!. Hip Hip Hip!! Hurray!!. Happy birthday, @mofedamijo . Lots of love”(sic).

Celebrating the icon as well, Dakore Akande wrote, “The Living Legend, the Icon Living Sir Richard Mofe Damijo @mofedamijo is 60!!!!???? How many 60-year-olds look like this????.

Alex Ekubo, Ayo Makun and others have also expressed and wished the veteran actor, RMD their heart felt birthday wishes.

Meanwhile, the celebrant RMD had earlier revealed how he broke the specter of death in his family, adding that his parents never made it to 60.

The movie star made this known during a chat with Chude Jideonwo on his show ‘WithChude.’

He said that his parents did not make it to 60, which was a big deal for him.

“None of my parents lived to be 60, so life for me is just about to get started.

“There’s been a specter of death around my life, that’s what I’ve been dealing with last year till this year.

“So, it was like, can I break it? When people see me and I go on a weight loss, people think that… you know, it’s health.

According to him, both parents were diabetic and hypertensive and wished never to be that.

“At least give myself a fighting chance to change that whole cycle. Yes, I’m a Christian now, so I’ve broken that yoke but I have to also help myself.”

“Becoming 60 for me is even a bigger deal, so when July comes and I become 60. You know how the Bible says old things have passed away.

“I will truly truly become a new man because that is when I’ll make a bucket list. So all these things that you think I’ve achieved or done, for me it’s nothing, like zero.”

RMD who is also a writer, producer, and lawyer, served as a one-time Commissioner for Culture and Tourism in Delta State.