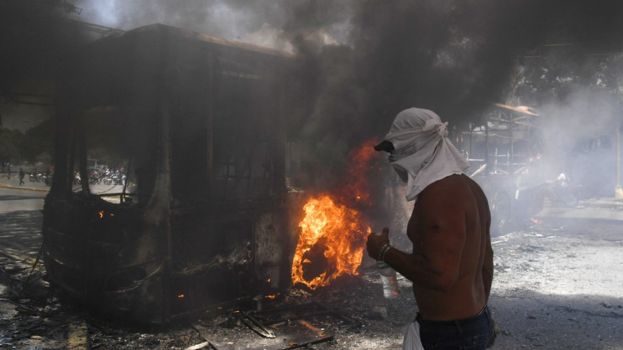 Venezuela’s President Nicolás Maduro claimed to have defeated what he called a military coup attempt by the opposition leader, Juan Guaidó.

Dozens of National Guardsmen sided with the opposition in clashes on Tuesday that injured more than 100 people.

But in a defiant TV address, President Maduro said Mr. Guaidó had failed to turn the military against him.

Mr. Guaidó insists that Mr. Maduro has lost control of the armed forces, and that a peaceful transition is at hand.

The opposition leader appealed for his supporters to take to the streets of Venezuela again on Wednesday.

Mr. Guaidó has been recognised as interim leader of Venezuela by more than 50 countries, including the US, the UK and most in Latin America.

But Mr. Maduro, backed by Russia, China and the top of the country’s military, has refused to cede leadership to his rival.

In his televised address, flanked by military commanders, Mr. Maduro accused protesters of “serious crimes” which he said would “not go unpunished.”

Both the president and Mr. Guaidó have called on their supporters to take to the streets, setting up more potential violent unrest in a nation already beset by economic crisis, chronic power cuts and widespread food shortages.

Mr. Maduro lashed out again at the United States, which he accuses of plotting against him. He dismissed a claim by US Secretary of State Mike Pompeo that he had a plane ready on the tarmac to take him to Cuba, a staunch supporter of the beleaguered president.

“They had an airplane on the tarmac,” Mr. Pompeo said. “He was ready to leave this morning [Tuesday], as we understand it. Russians indicated he should stay.”

A three-minute video by Mr. Guaidó published in the early hours of Tuesday showed him standing alongside a number of men in military uniform. He announced that he had the support of “brave soldiers” in the capital, Caracas.

He urged Venezuelans to join them in the streets, and appeared alongside another opposition leader, Leopoldo López, who had been under house arrest since 2014.

Supporters on both sides then gathered in different places of Caracas throughout the day, and there were clashes between Mr Guaidó’s supporters and armed military vehicles.

Protesters were also seen throwing rocks, but being repelled by tear gas and water cannon. At one stage a military vehicle was captured on video driving into protesters.

Mr. Guaidó, the president of the opposition-controlled National Assembly, has called on Venezuela’s military to back him ever since he declared himself interim president in January.

He argues that President Maduro is a “usurper” because he was re-elected in polls that had been widely disputed.