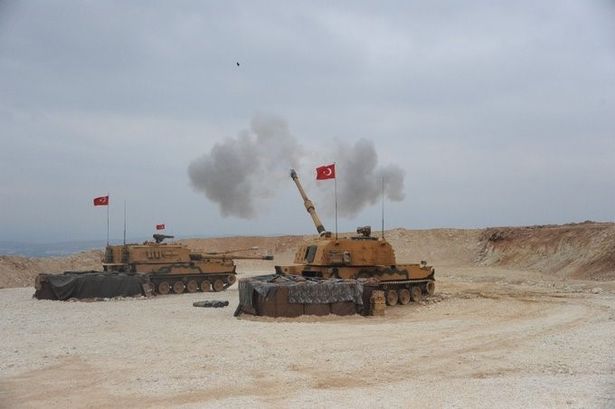 There was mass panic on the streets as war planes flew overhead and several large explosions rocked the northeast Syrian town of Ras al Ain, on the border across from the Turkish town of Ceylanpinar, on Wednesday.

The Kurdish-led Syrian Democratic Forces (SDF), which is backed by the United States, said there was “huge panic among the people” after Turkish warplanes carried out airstrikes.

A witness in the Syrian town of Tel Abyad told Reuters that sounds of explosions rang out and smoke was rising nearby along the border with Turkey, as people fled the town en masse.

Pictures show artillery moving in on the ground, supporting the strikes by warplanes.

Meanwhile NTV reports two mortar shells have hit the Turkish border town of Ceylanpinar. No casualties have yet been reported.

Erdoğan said Turkey, along with its Syrian rebel allies, aimed to eliminate a “terror corridor” along the southern Turkish border.

Erdoğan said the offensive, dubbed “Operation Peace Spring”, would aim to eliminate threats from the Syrian Kurdish YPG militia and the Islamic State militants, and enable the return of Syrian refugees in Turkey after the formation of a “safe zone” in the area.

This comes after Donald Trump pulled US troops back from Syria.

Smoke could be seen rising from buildings in Ras al Ain. Hundreds of civilians in northern Syria have fled areas on the border with Turkey.

There were no independent reports, however, on what was being struck in the initial hours of the operation.

Earlier on Wednesday, warning of a “humanitarian catastrophe”, Syrian Kurdish forces issued a general mobilisation call ahead of Turkey’s attack.

The Britain-based Syrian Observatory for Human rights reported that people had begun fleeing the border town of Tal Abyad.

Kurdish politician Nawaf Khalil, who is in northern Syria, said some people were leaving the town for villages farther south. 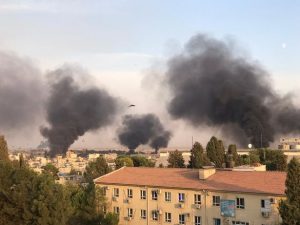 Turkey has long threatened to attack the Kurdish fighters whom Ankara considers terrorists allied with a Kurdish insurgency in Turkey.

In a statement released on Twitter, Erdogan said: “Together with the Syrian National Army, our Turkish Armed Forces launched the #Barışpınarıharekatı the against the PKK / YPG and Deash terrorist organizations in northern Syria (sic).

“Our aim is to destroy the terror corridor which is trying to be established on our southern border and to bring peace and peace to the region.”

Russian President Vladimir Putin told his Turkish counterpart by phone on Wednesday to avoid any steps in Syria that could damage its peace process, the Kremlin said.

The Kremlin said that both Putin and Erdoğan agreed in the phone call that Syria’s sovereignty and territorial integrity must be respected.

Syrian state media and a Kurdish official separately said bombing hit the town of Ras al-Ain in the northeast along the Turkish border.

A Turkish security source confirmed that Turkish howitzers – a type of tank – have started hitting bases held by the Kurdish militia, the YPG, along with ammunition depots.

The SDF has asked the US coalition for a ‘no fly zone’ to stop the Turkish attacks.

Meanwhile the US ambassador to Ankara, the capital of Turkey, has been summoned to the foreign ministry to be briefed on the Turkish operation, CNN reports.

Britain has raised concerns over the situation after Trump announced US troops would withdraw.