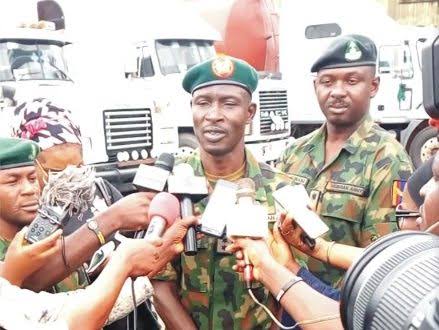 The Nigerian Army said its troops have rescued 20 people from the Boko Haram terrorists after a fierce battle in Yobe State.

Among those rescued was a medical team, comprising a doctor, a nurse and an ambulance driver.

The Nigerian Army Operations Media Coordinator, Col. Aminu Iliyasu, who disclosed this in a statement on Saturday, said that the operation took place at Babban Gida in Tarmuwa Local Government Area of the state on Wednesday.

According to him, the troops of Operation LAFIYA DOLE and elements of Yobe State Vigilantes supported by Air Task Force Operation thwarted the attempt by some of the insurgents to infiltrate the town.

According to him, after a fierce battle that lasted about one hour, the terrorists withdrew with one of them killed while one Rocket Propelled Gun 7 (RPG 7) bomb was also recovered from them.

He said: “It is gratifying to note that all 20 abductees of the criminal insurgents including a team of medical personnel comprising certain Musa Bulama (a medical doctor), Gana Yelwa (a Nurse) and Malam Bala Musa (Yobe State Primary Healthcare Ambulance driver) have been successfully rescued by the troops.

“Additionally, a Toyota SUV Ambulance belonging to the Yobe State Primary Healthcare Board earlier snatched by the insurgents was equally recovered by the gallant troops.

“Others equally rescued are Adamu Madugu, Tukur Abdulkarim, Ibrahim Sulaiman and 14 males who are teenagers of between 13 years and 16 years.”