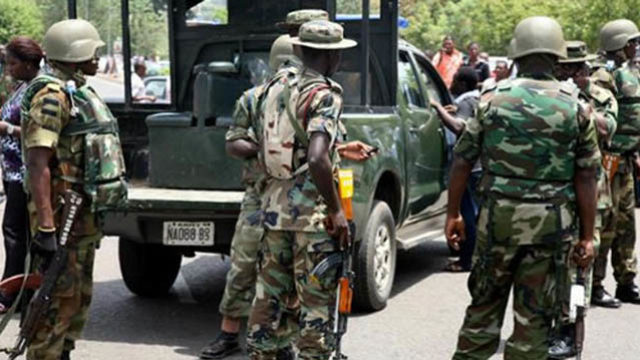 Troops of the Special Task Force, Operation Safe Haven (OPSH) maintaining peace in Plateau and environs, have arrested eight suspects in connection with the killing of three women at Rafin Bauna community of Bassa Local Government Area of Plateau.
Maj. Ishaku Takwa, the Media Officer of the task force, confirmed this in a statement on Tuesday in Jos.
The gunmen had attacked three women on a farm at the community, and instantly killed two and injured one, who also later died.
According to Takwa, the troops had responded to the attacks, but on arrival two of the women were killed already.
“Troops of OPSH this afternoon arrested eight suspects in connection with the shooting of three women on a farm close to Rafin Bauna general area in Bassa.
“The troops earlier responded to the distress call and immediately mobilised to the scene and discovered two of the three women were shot dead on the spot, while one of the women sustained gunshot wounds.
“Unfortunately the injured one later died while receiving treatment at the hospital.
“The general area was immediately cordoned off and eight suspects were arrested in connection with the shooting incidence.
READ ALSO: Ogun Traditional Ruler Withdraws Okorocha’s Chieftaincy Title
“The suspects are currently in the custody of OPSH and are undergoing interrogation,” he said.
The media officer said that the commander of the task force,  Maj.-Gen. Ibrahim Ali, had charged personnel to remain vigilant and take necessary measures to clamp down on criminal elements in the communities.
He said that Ali also urged law abiding citizens to always make use of the hot lines distributed to the public to provide information to troops for prompt action.
Takwa added that the commander further assured of his commitment to deal decisively with those bent on causing trouble in the state and environs. (NAN)