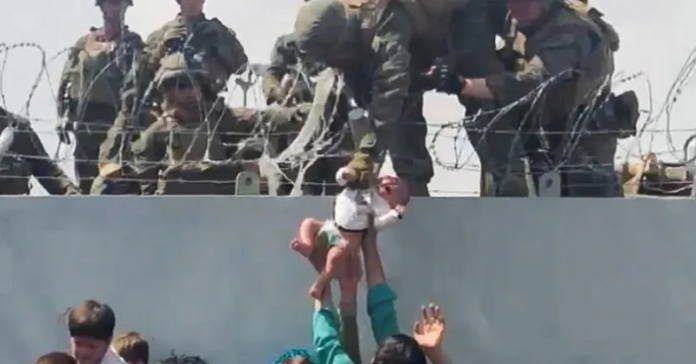 Thousands of people are besieging the entrances to the airport in the Afghan capital Kabul, which is the main lifeline for Afghans and foreign citizens trying to flee the country as the Islamist Taliban take over.

Shots continued to be fired almost continuously outside the heavily armed airport compound, a witness at the scene told dpa.

In the days since the Taliban took control of the capital and the country last Sunday, thousands of people have been airlifted out of Afghanistan from Kabul airport, the only part of the capital controlled by international troops.

Many desperate Afghans who have either worked with international troops over the past two decades or who work in areas such as human rights are fearing for their lives, with many trying to get themselves or family members inside the airport.

A report compiled for the United Nations warned that the Taliban is conducting targeted searches for supposed collaborators with the ousted government, regardless of assurances by the radical Islamist group that it would not carry out reprisals.

There have been repeated armed confrontations at the gates to the airport compound.

The U.S. military decides on when and how to open and close the gates, and the timing is not predictable.

Loudspeaker announcements at the northern entrance said the gate would now be closed for two days, the witness told dpa.

A second eyewitness said that people from all walks of life were outside the airport: actors, TV personalities, young people, women with newborn babies or people in wheelchairs among many others.

Images of a baby being handed to troops over the compound wall went viral on Friday.

A soldier grabbed the baby by the right arm and handed it to colleagues.

U.S. President Joe Biden has assured U.S. citizens and Afghans who worked with the Americans that they will be brought home, but there are many thousands still in the country.

Troops from many other countries, including Germany, Britain and Turkey, are carrying out simultaneous evacuation operations from the airport.

Meanwhile, the deputy head of the Taliban, Mullah Abdul Ghani Baradar, arrived in Kabul on Saturday, dpa has learned from Taliban sources.

Baradar, in charge of the Taliban’s political office in Doha, will conduct talks with Taliban members and other politicians on the formation of a new government, they said.

He flew into Kandahar in southern Afghanistan with a delegation on Tuesday afternoon.

Baradar is the highest-ranking representative of the Islamists known to have arrived in Afghanistan so far, and is tipped by intelligence sources to be given a post similar to that of prime minister.

In February 2020, he signed the agreement with the U.S. on behalf of the Islamist militant organisation to end the U.S.-led military mission in Afghanistan.

The withdrawal of U.S. troops led to the decision by other Western powers to also withdraw.

Taliban leader Mawlawi Haibatullah Akhundzada has not been seen in Afghanistan since the Taliban takeover and his whereabouts are unknown.

This week, several high-ranking Taliban representatives had met ex-president Hamid Karzai and Abdullah Abdullah, the chairman of the High Council for National Reconciliation, for discussions on a future government.

The Taliban have said they are planning to share power with other political forces. (dpa/NAN)