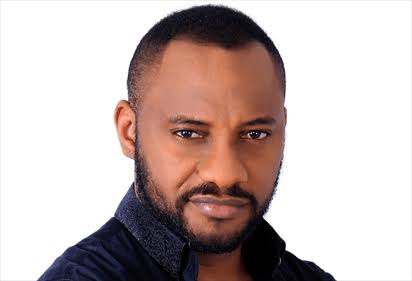 Nollywood actor and politician, Yul Edochie on Monday noted that ‘sex for benefit’ went beyond the tertiary institutions.

According to him, even in Nollywood, there was sex for roles
Reacting to the sex for grade scandal which broke on Monday where a lecturer with the University of Lagos, Dr. Boniface Igbeneghu was exposed harassing a supposed 17 year old girl seeking admission, Edochie said some actresses also had to engage in sex in order to get better roles.

He said sex for benefit was everywhere and expressed the hope that all those who harass women sexually for what ever reason would be exposed.

His reaction posted on his personal Twitter handle read: “No be only #sexforgrades ‘dey oo,’ there’s sex for roles in Nollywood, sex for promotion in offices. ‘E dey everywhere. I hope they’ll be exposed.”

Meanwhile, Dr. Igbeneghu has been suspended by the University of Lagos and Foursquare Gospel Church where he headed a local parish.

UNILAG has also closed down the notorious ‘Cold room’ where Igbeneghu revealed lecturers took girls to smooch them. 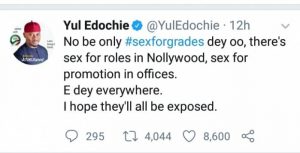