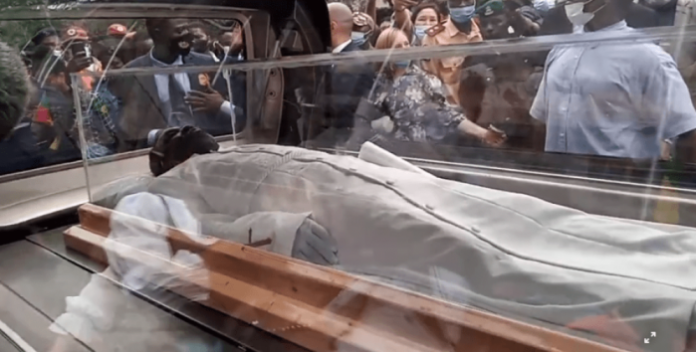 The Founder of the  Synagogue Church of All Nations (SCOAN), Prophet T.B  Joshua, was on Friday laid to rest in the church premises at Ikotun, Lagos.

Joshua died after a church service at SCOAN on June 5, few days to his 58 birthday anniversary.

SCOAN had at a news conference on June 29 said that July 5 to July 11 would be  dedicated for a series of Joshua’s ‘laying to rest’ activities tagged: ‘Celebrating the Life and Legacy of Prophet Joshua (1963 to 2021)’.

Several people from different races, cultures and countries gathered to give final respect to the late prophet.

Before interment of the late prophet, his burial service was held and Bible passages read.

The first Bible reading, taken from First Corinthians 15: 51 – 57, was taken by Gov. Rotimi Akeredolu of Ondo, after which Bishop Stephen Ogedengbe of the Wisdom of Chapel Ministry explained the passage.

The cleric urged Christians to emulate the exemplary life of love lived by the late founder of SCOAN.

Ogedengbe said: “The character of a true believer is to find refuge in our Lord Jesus.

“That is why children of God are not afraid in reaching the final destination –  death.

”Heaven is our home, our dwelling place.”

According to him, Joshua had always mentioned that those from above longed to be there.

Minister Ayoub Kara from Israel took the second Bible reading from Revelation 21: 1- 7, while Pastor Robert Acosta from Argentina peached a sermon from it.

Acosta  said that christians should follow Christ “because outside Jesus there is no reality.”

He said that Joshua did so many miracles and showed much love to many people.

After the sermon, Akeredolu and the representative of governor of Lagos State delivered speeches.

Sanwo-Olu told the congregation that the late prophet fulfilled his destiny on earth by living for others.

He encouraged christians to long for the spirit of dedication shown by SCOAN founder.

“His life should encourage us to renew our hope in Christ.

“Unity, peace, progress and love should be our watchword as christians,” he said.

Sanwo-Olu urged Christians to emulate the late prophet’s life and live in peace with everyone without discriminating.

In his speech, Akeredolu, described the death of Joshua as a huge loss to the people of Ondo State, Nigeria and the world at large.

Akeredolu said that Joshua contributed immensely to the emancipation of the downtrodden, orphans, widows and other less privileged people.

He said that the late prophet touched the lives of many people economically and spiritually.

“He was not born with a silver spoon but from what I heard, he was a special child because he performed miracles even from primary school.

“He was born with a special gift, and his love was not only for the less priviledged.

“Even those of us who are privileged benefitted from his love,” Akeredolu said.(NAN)