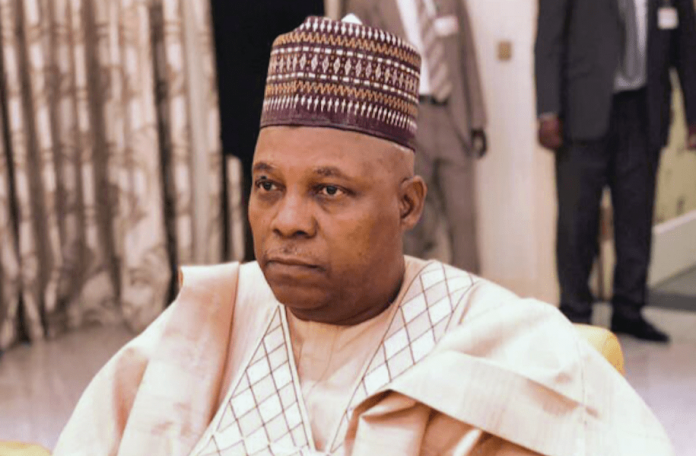 The party, on Saturday, expressed dissatisfaction with the conduct of Shettima in a statement signed by the Director-General, Labour Party Campaign Organisation, Dr. Doyin Okupe.

Okupe noted that the vice-presidential candidate of the APC had made many derogatory remarks on the LP’s flag bearer and other candidates in the race for the presidency, flouting the terms of the peace accord signed by all political parties under the supervision of the National Peace Committee headed by a former Head of State, General Abdulsalami Abubakar.

He described the language being used by Shettima as offensive, derogatory and unethical.

Okupe stated, “We have watched with dismay and disgust the various unguarded insults and disparaging remarks passed on our presidential candidate and other candidates by the vice-presidential candidate of the APC, Mr. Kashim Shettima. Whereas, our political parties are all signatories to the National Peace Accord, supervised by the General Abdulsalami Abubakar’s National Peace Committee, which represents the bonafide code of conduct for all corporate and individual direct participants in the current electoral process.

In the peace accord signed in Abuja, it was expressly stated that candidates would avoid the use of abusive and offensive language throughout the campaigns. It is, therefore, very unfortunate and regretful  but not exactly surprising that in flagrant disregard for the clauses and principles of this accord, the APC vice-presidential candidate in particular has continued repeatedly to play the court jester  by persistently, irresponsibly and recklessly making all sorts of derogatory comments, totally at variance with good manners and decorum.

“We are in no doubt whatsoever that while he has consistently abused the opportunity of public audience by making these snide remarks about His Excellency, Peter Obi, and other candidates, he cannot in the least and in any way ever measure up to these his political superiors in integrity, character and status, not to mention vision, policies and national acceptance.”

Recall that Shettima had in a TV programme said, “Osinbajo is a good and nice man but nice men do not make good leaders, nice men should be selling ice cream.”

“The training that the elder statesman got from Kano School of Hygiene is that of a ‘wole wole’. And believe me, the ability to sell bottle water does not make one an expert on the economy. Atiku Abubakar is not Abraham Lincoln, he is more of a Raila Odinga.”

“Peter ‘Gringori’ Obi is my friend but Gringori has absolutely nothing to offer apart from dubious statistics. So, the choice before us, there is a difference between daylight and darkness.” (The Punch)