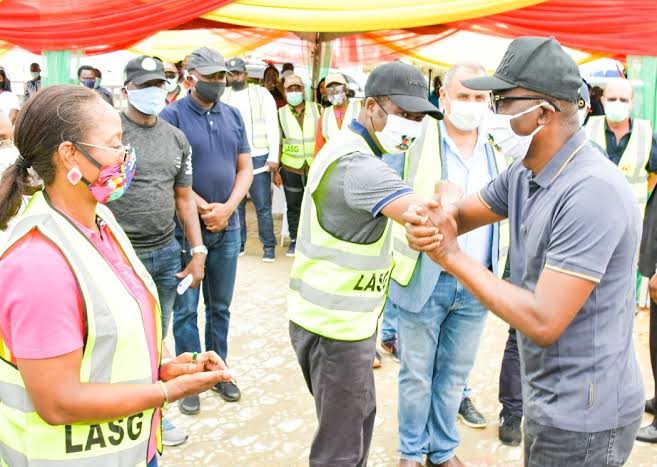 Governor Babajide Sanwo-Olu has flagged off the construction of the long-awaited Regional Road in Lekki region, Eti-Osa Local Government Area of Lagos State.

The regional road is a critical infrastructure proposed in the Lekki-Epe master plan aimed at decongesting traffic gridlocks in Eti Osa LGA.

Speaking during the flag off ceremony on Saturday, Sanwo-Olu said that the development was a manifestation of his administration’s commitment towards improving socio-economic activities on the Lekki-Epe axis by the provision of supporting infrastructure.

The construction of the 8.75 kilometre-long road, being undertaken by Messrs Hi-Tech Construction Company Limited, will link Lekki-Epe Expressway at Victoria Garden City (VGC) Junction to the Freedom Way in Eti Osa.

The News Agency of Nigeria (NAN) reports that the road is believed to be a precursor to the proposed Fourth Mainland Bridge that is expected to take off from the axis.

However, the governor said that when completed in the next 24 months, the Regional Road would change the entire landscape of Eti-Osa and improve journey time for commuters.

According to him, the road will also drive up the efficiency of government’s traffic management strategy.

He said: “With the flag off of the construction of this critical road infrastructure, we are keeping the promise we made to Lagosians.

“As a government, when we give commitments to our people, we do not shy away from it. Our word is our bond. Today’s event is a manifestation of our pledge to address infrastructural challenges on the Eti Osa axis.

“We know what people go through on the Lekki-Epe Expressway as a result of traffic. We are moved by the pains to hasten the process of putting the Regional Road in place to bring the long sought relief to our citizens working and living on this axis.

”Today, we are here for the groundbreaking ceremony to start work on this critical infrastructures.”

Sanwo-Olu stated that the government and the contractor had made plans for exigencies that might arise in the course of the construction work, promising that the project would not be stalled by unforeseen challenges.

He said that Hi-Tech had assured the government that the project would be delivered on agreed period, even in the event of being faced by unforeseeable challenges.

“By the time of our third anniversary in office, we should have been getting ready to commission this road.

“That is the commitment we have given and we are going to hold the contractor on this timeline. As a government, we will keep our own part,” Sanwo-Olu said.

The governor said that sanctions awaited property developers and state officials who undermined the state’s planning approvals and encroached the alignments of the Regional Road.

He directed the Ministry of Physical Planning and Urban Development to sanction any state official found culpable in compromising the planning approval and Right-of-Way of the road.

“The Regional Road alignment has been gazetted long time ago, but we realise people deliberately flouted our approved plan for the road.

“I have instructed the Commissioner for Physical Planning and Urban Development to discipline and sanction officials that have been found culpable to compromise any form of approval for the Right-of-Way.

“They will be punished with people who raise property on the approved alignment,” he said.

Sanwo-Olu appealed to residents to cooperate with the government and the contractor towards making the project a reality, as the construction work might bring about a temporary period of hardship.

He said the relief that would follow the completion of the project would assuage any feeling of pain experienced by residents on the axis.

The governor also said that the proposed Fourth Mainland Bridge would take off before the end of the current dispensation.

He said the bridge was not part of his campaign promise, but added that the completion of the Regional Road necessitate the need for the bridge.

“Within the first quarter of next year, we would have identified the best bidder for the construction of Fourth Mainland Bridge, which will extend from Eti Osa to Ikorodu and burst out of Lagos-Ibadan Expressway.

“This project will have a great impact on our traffic management and transportation blueprint,” the governor said.