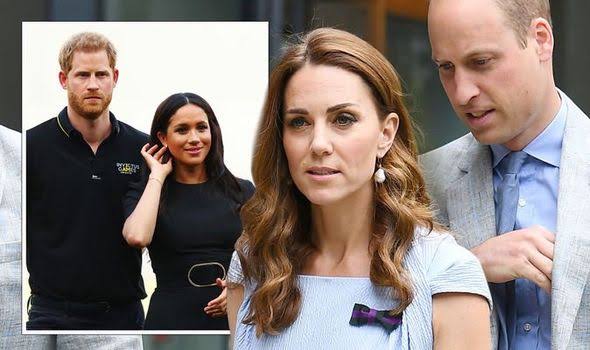 KATE and Prince William have removed all mention of Meghan Markle and Prince Harry from their charity, documents published have revealed.

It marks the latest instance of the couple’s officially splitting their responsibilities, amid ongoing rumours of a full-blown royal feud.

The Sussexes revealed plans for their own charity, named the Sussex Royal Foundation, earlier this year.

This week the pair announced Kate Blackett, 48, had been appointed a director the charity.

The businesswoman was named number one in the Powerlist of the 100 most influential people of African or African Caribbean heritage from with the UK in 2015.

Ms Blackett was also awarded an OBE for services to the media industry in 2014.

However, Palace sources have denied a split and said the name change was an administrative necessity.

One source told the Mail Online: “It was largely about preparing both couples for their future roles, which are obviously on divergent tracks.”

The name change comes after a royal expert claimed Harry had been used as a “decoy” for William’s own bad behaviour.

Simon Vigar, speaking on the Princes At War documentary, revealed how Harry served as a useful took for his older brother.

He said: “Harry has obviously got into some scrapes which have landed him on the front pages of the newspapers.

“But at plenty of those parties, particularly the teenage parties, William was there, Harry served as a really useful decoy.”

One expert previously said Meghan will constantly be held up against Kate due to the way she is raising her son Archie Harrison Mountbatten Windsor.

Carole Ann Rice, a motherhood expert and life coach at Real Coaching Co, told Express.co.uk: “Every mother has their own way of doing things.

“We know our babies and we do what’s right for us.

“Poor Meghan will always be held up against her sister-in-law Kate, who is an experienced mum who appears to have a traditional way of rearing their children.

“Meghan is a modern mum who might try a few alternative ways of being a mother and perhaps some of us can learn from these new methods.”