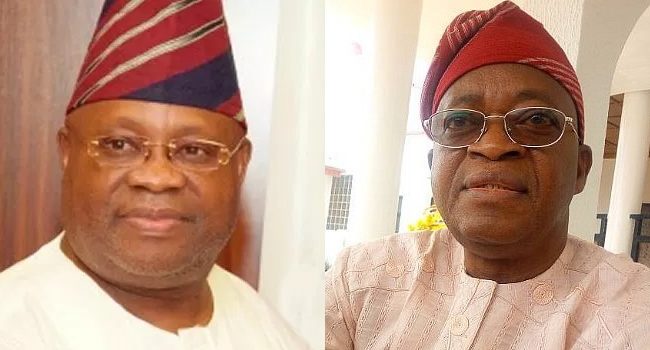 The Supreme Court has dismissed the appeal by the Peoples Democratic Party, PDP, guber candidate in the 2018 Osun governorship election, Senator Ademola Adeleke, challenging the declaration of Gboyega Oyetola of the All Progressives Congress, APC, as winner.

The Supreme Court in a majority, but split decision of five-to-two, read by Justice Olabode Rodes-Vivour, declared that the absence of the judge who read the decision of election tribunal, Justice Peter Obiora, made the entire proceedings and the judgment of the tribunal a nullity.

The justice upheld the decision of the Appellate Court that the proper thing to have done in the absence of the judge was to start the trial from the beginning and ruled in favour of Oyetola.

A five-member panel of the Appeal Court had declared Governor Oyetola winner of the gubernatorial election.

In its judgment, read by Justice Jummai Sankey the Court held that the tribunal’s ruling read by Justice Peter Obiora amounted to judicial hearsay because he did not participate fully in the proceedings of the Tribunal.

It also said that the entire proceeding leading to the tribunal’s judgement could not stand because of its “faulty composition,” and therefore returned Oyetola winner of the election.

The lead judgement was, however, dissented by a member of the five-man panel, Justice George Mbamba, who said the allegation that Justice Obiora did not attend all the sessions of the Tribunal was speculative.

Earlier, the Osun State Election Tribunal declared Adeleke winner, saying that the September 27 rerun election in the state was illegal.