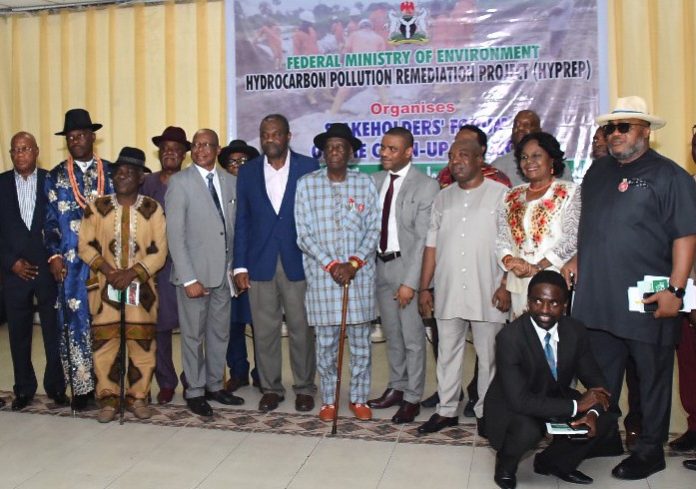 Stakeholders from Ogoni in Rivers State have been reacting to the sack of the former project coordinator of the hydrocarbon pollution remediation project, Dr. Marvin Dekil.

Reacting to this development, the Movement for the Survival of Ogoni People (MOSOP), said it welcomed Dekil’s replacement and would not protest his sack for any reason.

President of MOSOP, Fegalo Nsuke in a statement in Port Harcourt said “we look forward to more changes in HYPREP though we understand how difficult it could be getting HYPREP to be effective and beneficial to the people giving its terrible records of corruption and with Shell as a decision maker on the board of its Governing Council.”

Nsuke, who had been very critical of the slow pace of work at the various sites of the Ogoni clean-up, called for the probe of the finances of the agency in view of the millions of dollars spent by the oil majors to prosecute the project.

Kpalap said until his removal, Dekil “was a huge liability and embarrassment not only to the agency, but also Ogoni.”

He said that “MOSOP would equally call on Abuja to fish out other criminal elements in the system that collaborated with the former project coordinator to arrest and frustrate progress of the Ogoni environmental restoration exercise.

“We would likewise demand for the umpteenth time, a forensic probe of the commission if current reform is to be effective. HYPREP stinks of corruption, nepotism and inefficiency hence, the investigation would help to unravel the level of rot in the agency as well as instill discipline.”

The Ogoni leader said that it was saddening that for over four years of Dekil’s management, emergency measures prioritised by the United Nations Environment Programme (UNEP) had remained unimplemented.

“Alternative safe and clean drinking water, Integrated Contaminated Soil Management Centre and employment for artisanal refiners amongst others are undone to date and in the face of enormous, available revenue.

“Unfortunately, rather than invest accessible resources appropriately to bolster progress of the Ogoni clean-up exercise, the ex-PC and his collaborators opted for ‘akawo’ to the detriment of the project.

“Information available to us shows that a colossal part of the project fund is illegally deposited in interest yielding accounts in foreign banks, while the exercise suffers. And only God knows what has happened to the accrued profit (interest).

“Instead of concentrating on making his tenure impactful, he elevated self-importance and other vanities to Everest height.

“He resorted to fueling divisions in Ogoni especially in the apex socio-cultural organisations of the people to frustrate their cohesive check on the agency.

“He as well sponsored intimidation of vocal voices through the utilisation of dreaded cultists and also sponsor media propaganda with huge budgetary allocation in an attempt to silence outcries and condemnations.

“We would thus urge the interim acting project coordinator not to imitate this abysmal and condemnable approach of his predecessor.”

On the plans by HYPREP to truck water to some selected Ogoni communities, Kpalap said this was “unacceptable even if it is a temporary arrangement. Clean and safe drinking, we must say, is the only benefit of the project that would be Ogoniwide. Hence, we insist that clean and safe drinking water has to be piped to all Ogoni communities as we will accept nothing less.

“Water facilities exist in all the kingdoms of the Ogoni nation. All that may be required is to work and activate them, and as well expand the distribution lines to reach areas not covered.

“You will be preventing poor relationships between HYPREP and Ogoni by heeding our advice.”

The management of HYPREP has received a series of bashings for the slow pace of work in the cleanup even when as much as over $300 million has been paid Shell and other oil producing partners to that effect.

The agency was alleged to have awarded N1billion media consultancy job to a local company with nothing to show for it.