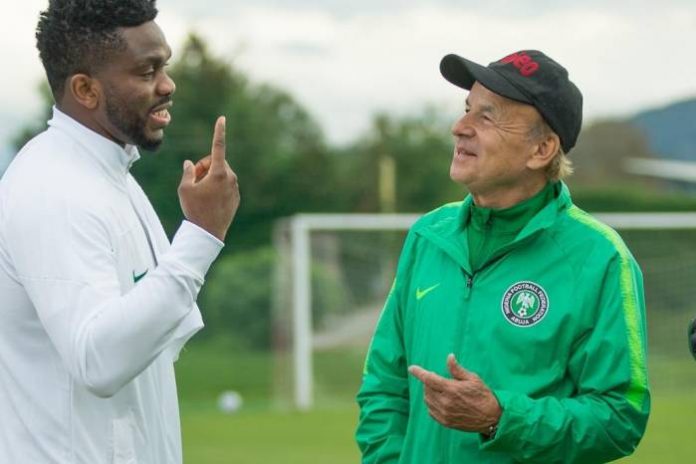 Recent listless performance by the Super Eagles  including the  dramatic 4-4 draw and drab goalless  draw against the Leone Stars in the 2021 AFCON double header  in Benin and Freetown respectively have partly been attributed to poor playing surfaces.
This much was highlighted  by the chief executive officer of  Monimichelle, Ebi Egbe  even as he  rallied support for the under-fire Super Eagles German coach Gernot Rohr.
The head of the wave-making  sports facility construction outfit, said the Super Eagles would surely find their mojo  should  the team be offered the necessary support by football stakeholders.
“Super Eagles is our team and to be honest, I think we have a very good  team made up of good players,” Egbe  explained.
READ ALSO: Boko Haram Terrorists Attack Governor Zulum’s Convoy Again, Kill Seven Soldiers, Two Others
“I make bold to say that the Super Eagles will do very well at the next Africa Cup of Nations in Cameroun and they can lift that cup because we have the players.
“What we have presently in the Super Eagles are  refined players  and many of them grew up training and playing under smooth surfaces  and as we all know, the AFCON pitches are always  refined  tournament pitches which do not outlive the tournament for which they are constructed… I think we are going to see the best of our team in Cameroun.”
Egbe who is handling renovation of  numerous playing facilities around the country, said coach Rohr  should be  supported  than constant bashing  of the team when things go awry, adding  the Super Eagles cannot do well  without  the support  of all and sundry.
“I don’t think the coach (Gernot Rohr) is bad. We have to give him the necessary  tools in order for him to succeed  because  he can’t do it alone; and that I think is the honest truth. He can’t succeed alone; most people might not really understand  when I dwelled on the fact that we have ‘refined players’  and because of their up-bringing, we just need to give them refined pitches to play upon.”
Egbe stressed that Sierra Leone did their homework on our players, hence they took them to the “rice field” in Freetown where no player can play to his full potentials.
“I repeat that we need not to make our players struggle in home and away games. At home, our boys should enjoy the luxury of playing on the kind of pitches they play on out there in Europe and this is why I m clamoring for Nigeria to have world class pitches…pitches with zero undulation and lush green.”
Egbe re-echoed the vision of his outfit which is the eradication of bad pitches not just in Nigeria but the African continent.