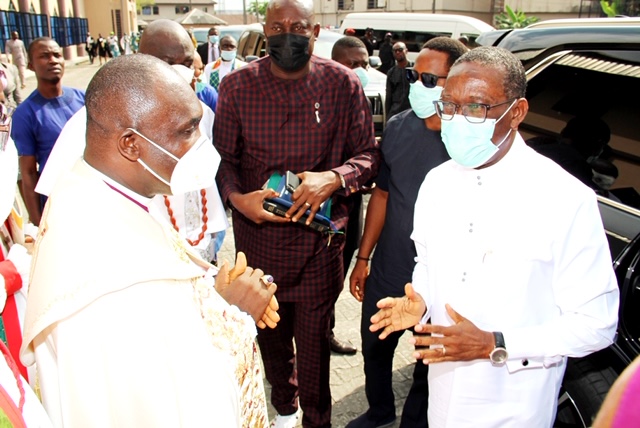 Delta Governor, Dr. Ifeanyi Okowa, has said that the state government will embark on the construction of Orere bridge in Ughelli South Council Area in 2021.

Okowa disclosed this on Sunday at the thanksgiving service for Most Rev’d Cyril Odutemu, Archbishop of Bendel Province to mark his 10th Episcopal Consecration Anniversary and Presentation as Archbishop at the All Saints’ Cathedral, Ughelli.

He said that plans to construct the bridge, which would link Orere community with other parts of the local government area and the state, had been worked out and provided for in the 2021 Budget of the state.

The governor, who took the first reading at the service, advised Christians to have faith in God if they were to achieve anything in life.

He thanked the people of the church for celebrating the Archbishop, adding that he was one clergy man that “speaks truth to power always”.

He commended the Archbishop for always speaking out for his people, and assured that his administration would endeavour to complete the construction of the Orere bridge in record time.

“At every instance the Archbishop has always reminded me about the need to construct the Orere bridge. We are in very difficult times but I believe that God will provide and I must assure you that the bridge is in the 2021 budget and I am confident that COVID-19 will not disturb us anymore.

“By January we shall start up with the bridge in the coming year because I have been informed by the Speaker that the 2021 budget has been passed and awaiting my assent.

“The Archbishop is a good man and it will be difficult not to grant a request from him; so, we will execute the bridge so that your people will be able to drive home successfully,” he said.

The governor appreciated for His mercy and blessings on Odutemu, saying that the excitement in the church “shows that we are happy with our own because 10 years as a Bishop is a great feat and within that period he has become an Archbishop.

“I haven’t known him for too long but one thing he does is that he speaks truth to power and I am happy to identify with him as one of my fathers in the Lord”.

In his sermon, titled “It is the Lord”, the Primate, Church of Nigeria Anglican Communion, Most Rev’d Henry Ndukuba, called on Nigeria’s leaders to always acknowledge God as the giver of power and to render services to the people as unto God.

He commended Archbishop Odutemu for his contributions to the service of God, adding that there was a great future ahead of him in the service to God.

Ndukuba said that whatever anyone achieved in life was the Lord’s doing and should return all the glory to God, noting that the excellency of power belonged to God as He giveth power to whomever He pleased.

“You can’t encounter the Lord and remain the same and so whatever you achieve in life is the Lord’s doing and as humans we should always return all the glory to Him.

“Leadership is a gift from God and a sacred trust and because it is a gift and trust from God we don’t earn it,” he said.

He charged leaders to discharge their duties as unto God, saying “as leaders, we must also bear in mind that leadership is time-bound and what you have to do, do it quickly before the time elapses.

“Be careful and take heed and take responsibility. Whatever you are asked to do, do it quickly so that you won’t be found wanting at the appropriate time,” he advised.

“I watched a programme of your development projects in the riverside area of the state to give opportunity to the dwellers to engage in trade and commerce.

“Your people-oriented governance and leadership is greatly appreciated and we will continue to pray to God to bless you with more wisdom, and to render greater services to the people of Delta and beyond.” Ndukuba stated.

In his remarks, Odutemu thanked Governor Okowa for his support to pilgrims in the state.

Odutemu who is Chairman of the State Pilgrims Welfare Board disclosed that the governor had approved the sponsorship of 315 Christian pilgrims by the state government to Israel, this year.

He added that the governor had also approved funds for the pilgrims to travel directly from Asaba International Airport to Tel Aviv Airport in Israel, and urged all to continue to pray for the governor for his good deeds.