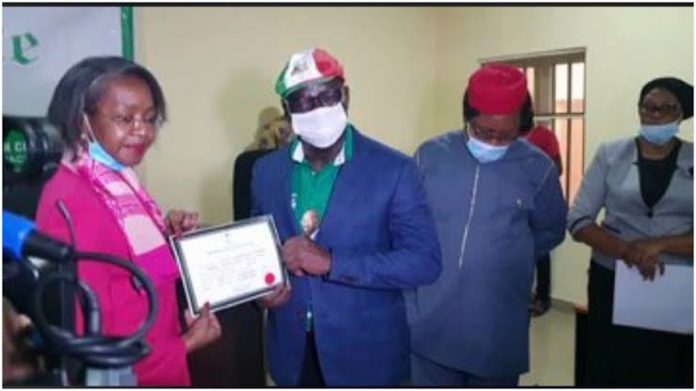 The National Commissioner, INEC in charge of Edo, Rivers, and Bayelsa, Mrs. May Agbmuche-Mbu made the presentation on Tuesday at the INEC office in Aduwawa, Benin City, the Edo State capital.

While making the presentation, Agbmuche-Mbu said, “I hereby certify that Godwin Nogheghase Obaseki of Peoples Democratic Party (PDP) has been elected to the office of governor of Edo State of the Federal Republic of Nigeria at the election held on the 19th of September 2020.”

She commended stakeholders particularly the security agencies for their role in the smooth conduct of the governorship poll.

Governor Obaseki was returned elected by INEC after polling the highest number of votes in the Sept.19 election.

Obaseki was declared winner of the election by INEC’s Returning Officer for the poll, Professor Akpofure Rem-Rukeh, on Sunday at the office of the electoral umpire in Benin City, which also served as the final collation centre.

Meanwhile, Gov. Obaseki has offered an olive branch to leaders and members of the All Progressives Congress (APC) in the state.

Speaking after receiving his certificate of return, Obaseki noted that the fight was over between him and his predecessor Adams Oshiomole who is also the former Chairman of the APC.

He also called on the flagbearer of the APC, Osagie Ize-Iyamu, and other members to join in the administration of the state and in moving Edo State forward.