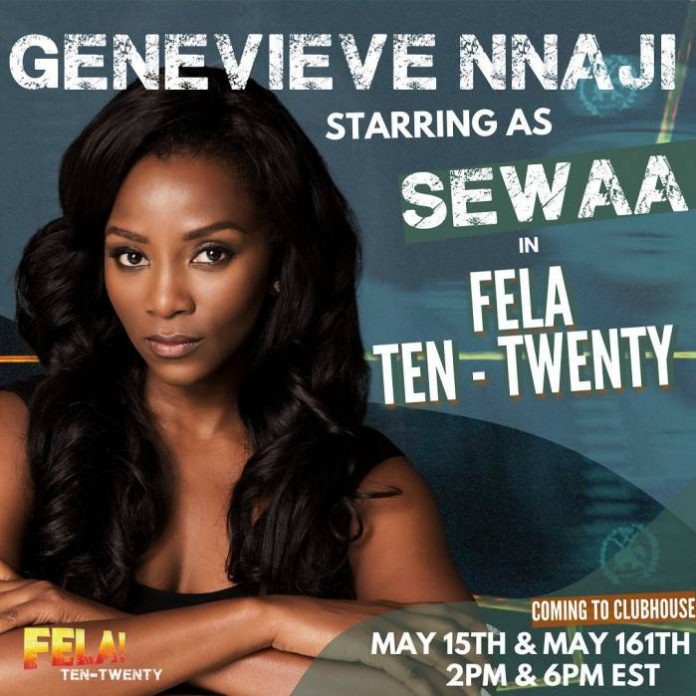 A statement issued on Tuesday by the organisers, said the audio play would be premiered on Clubhouse, the popular drop-in audio chat platform, on May 15 and May 16, with shows at 2 p.m. and 6 p.m. on both days.

Clubhouse is a social platform, built around “drop-in audio chat”, featuring ephemeral real-time voice conversations that any user can listen to but cannot record.

The statement said the proceeds from the show would support GEANCO, whose work provides full tuition, healthcare and social and psychological support to young female survivors of terrorism and gender inequality in Nigeria and across the continent.

The statement quoted Nnaji as saying: “The contemporary issues highlighted in the script are what sold me; this is an artful retelling of Fela’s story and I’m honored to be a part of it.

“I grew up on radio plays and the experience is nostalgic for me – the power of voice to influence minds and touch hearts is undeniable.”

Music for the production would be recorded in Lagos, Nigeria, by The Cavemen, the widely-celebrated band rekindling Nigerian highlife with their new album Roots.

Funa Maduka, writer, director and producer of Fela Ten Twenty, commended the actress for her efforts to see the play come to reality.

“For this adaptation, I tripled speaking roles for women by bringing the voices of the Kalakuta Queens, women who fought and performed alongside Fela, to the forefront.

“Women have long been at the center of political movements, especially in Africa.

“To have a woman of Genevieve’s caliber play a Kalakuta Queen, only elevates this legacy of leadership, fortitude and grace.”

Genevieve Nnaji is a Nigerian actress, producer and director.

She won the Africa Movie Academy Award for Best Actress in a Leading Role in 2005.

In 2011, she was honoured as a Member of the Order of the Federal Republic by the Nigerian government for her contributions to Nollywood.

Her directorial debut movie, Lionheart, was Nigeria’s first submission to the Oscars.

Nnaji frequently uses her platform to advocate for social causes, including #EndSARS, which the Fela Ten Twenty script adaptation centers.

She joins a talented cast of actors from Nigeria, the UK and the US, including: Sir Marcell as Fela Kuti, Jumoké Fashola as Funmilayo Kuti, NC Grey as Najite – a Kalakuta Queen and Nneamaka Nwadei as Omolara – a Kalakuta Queen.

Others are Malikat Rufai as Sandra Izsadore, Uche Ogodi as J.K. Braimah, Comfort Dangana as DJ Switch, Adeola Adebari as Tunde, Muhammed Agboluaje as the Driver, LaToya Ransom as the Radio Journalist and Aliu Ajala as the Babalawo. (NAN)