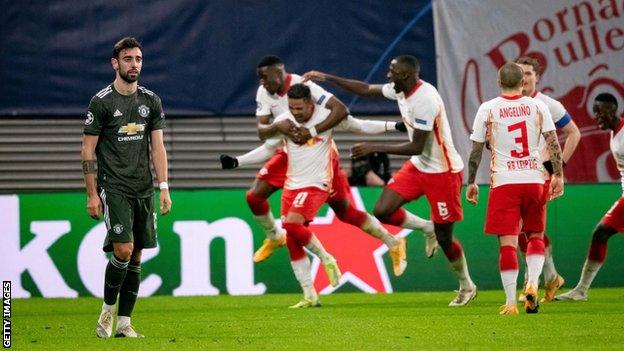 A late comeback wasn’t enough as Manchester United lost 3-2 at RB Leipzig, sending them crashing out of the Champions League.

United went into the match knowing that a draw would be enough to see them progress from Group H, but Manchester City loanee Angelino opened the scoring with just two minutes on the clock, ghosting in at the back post and lashing in a superb finish into the far corner.

It was a damning indictment of United’s defensive shape that the left-sided player could find himself totally free inside the box from a cross in that fashion, with Angelino again in space for the second, sending in a deep cross that was expertly volleyed home at the far post by Amadou Haidara on 13 minutes.

Leipzig could have had a third before half-time, only for the video referee to correctly scratch off Willi Orban’s ‘goal’ for offside.

But the hosts did get their third in the second half when a shambolic defensive mix-up saw substitute Justin Kluivert dink a shot over David de Gea to seemingly put the game to bed.

However, a Bruno Fernandes penalty on 80 minutes gave United hope after Mason Greenwood was adjudged to be fouled in the box. And Paul Pogba headed in the second at the back post off Harry Maguire’s head, or potentially hand according to Leipzig’s protests, to set up a barnstorming finish.

But it was not enough on the night as United suffered defeat to the team they had thrashed 5-0 at Old Trafford earlier in the group to crash out of the competition.