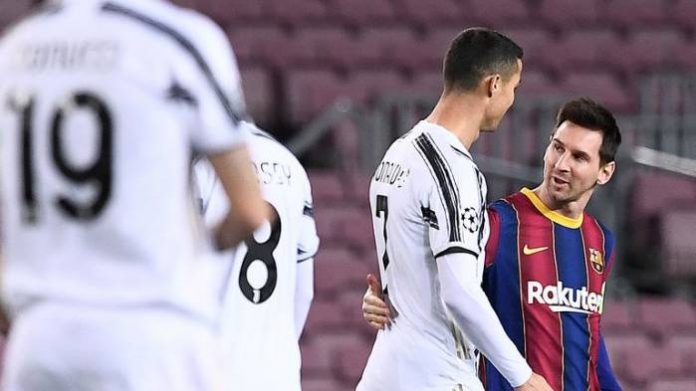 It was Ronaldo’s first meeting with Barcelona and Lionel Messi since leaving their bitter rivals Real Madrid in 2018 and though the pair briefly embraced before kick-off on Tuesday night, it was Ronaldo who quickly made his mark.

The Portugal star tested Barca goalkeeper Marc-Andre ter Stegen early on, before opening the scoring from the spot in the 13th minute after being felled by Ronald Araujo.

Defender Danilo flashed an effort just wide as the visitors cranked up the pressure, with a stunning Weston McKennie volley putting the Italian champions two goals up and in full control seven minutes later.

Ronaldo got his second penalty when Clement Lenglet was penalised for handball seven minutes after the restart.

As he could twice celebrate with his trademark leap, Messi was left frustrated as he failed to beat Gianluigi Buffon with his five shots on target.

Things almost got worse for the Catalans 15 minutes from time when Leonardo Bonucci thought he had scored, only for a VAR review to show he had been offside as he bundled the ball in from close range.

Both sides had already qualified for the knockout stages before kick-off and while they end the group phase on 15 points, Juve take first place by virtue of a superior head-to-head record.

Under-fire Barca boss Ronaldo Koeman was left furious, however, at the nature of his side’s display.

“The defeat was because of how we played in the opening 25 minutes,” Koeman said.

“We started badly, we looked scared, we weren’t aggressive. It looked as if we’d come out looking not to lose, as opposed to trying to control the game. We weren’t good, not even positionally.

“We got better but we lost the game in the first half an hour.”