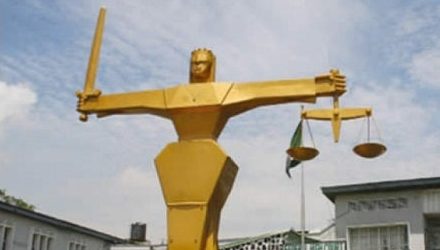 An Ikeja Domestic Violence and Sexual Offences Court, on Thursday, sentenced a man, Michake Ogbar, to life imprisonment for defiling and raping his three daughters aged  10 years, 20 years and 24 years.

The News Agency of Nigeria (NAN) reports that Justice Abiola Soladoye held that  prosecution proved beyond reasonable doubt, the charge of defilement and rape brought against Ogbar.

“Evidence before the court shows that the prosecution has proved the case of defilement and rape before this court.

“The defendant, who is the father of the three daughters, is found guilty as charged, as the burden of proof has been discharged.

The judge said it was disheartening that the man defiled and raped his daughters for years in the absence of his wife.

“It is disgrace to parenthood.

“The defendant ravished his own daughters in turn, committing incest. It is rather shameful and most perverted.

“The defendant is hereby found guilty and sentenced to life imprisonment on count one.

Soladoye said that the sentence would run concurrently, and ordered that the convict should have his name written in the Lagos State Sexual Offenders Register.

Lagos State Government, which brought the charge, presented six witnesses during the trial.