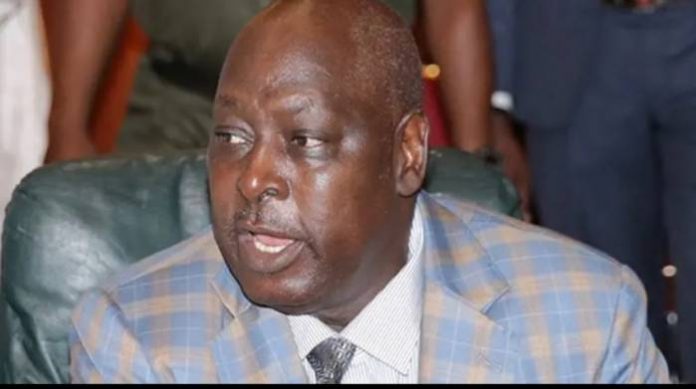 A former Secretary to the Government of the Federation (SGF), Engr. Babachir Lawal, has rejected Senator Kashim Shettima as the Vice-Presidential candidate of the All Progressives Congress (APC) in the 2023 elections.

This has generated heated controversy among the populace.

However, Babachir, who hitherto had been a vocal supporter of Tinubu, condemned the action of the Presidential candidate.

In a statement on Tuesday night, the former SGF urged President Muhammadu Buhari to exercise his powers as the Commander-in-Chief and as the APC Leader to revoke Shettima’s nomination.

“I thought I will be able to avoid commenting on the disastrous error by my very good friend, Senator Bola Ahmed Tinubu in his choice of a running mate. I will be the very last person to stand in the way of my very good friend Tinubu’s path to the presidency. This is because since 2011 my consuming passion has been for him to succeed Buhari as President of Nigeria,” Lawal said.

According to him, be had conveyed his reservations to Tinubu and his friends against the “pitfalls” of a Muslim-Muslim ticket.

He said he has on many occasions argued the merits and demerits of both ticket permutations to him and had also in both verbal and written form showed his displeasure to such development.

“Tinubu is a very good man. He is a great listener. He has a very humble and friendly disposition to every one. But I have realized that it is in the nature of power that sycophants and lapdogs have the most influence on leaders with such character traits.”

“They will lie to him, malign and disparage others and generally do any thing to curry his favor and to also put well-meaning associates in bad light. I suspect this is what has happened to my friend. He has been cornered by self-serving, hero-worshiping, lapdogs.

“It never used to be like this. While in his hay-days in Lagos, he surrounded himself with smart, street-wise guys that could tell truth to power. He had Rauf Aregbesola, Yemi Osinbajo, Babatunde Fashola, Dele Alake, Muiz Banire, etc. The Lagos days were the days of think-tanks, strategic planning, monitoring and evaluation, principles and ideologies.

“But these people have since grown-up and moved up to establish their own systems living my friend stranded. But the Abuja equivalent are people inflicted with the modern Nigerian diseases-religious bigotry, sycophancy and morbid tribalism.

“The result is that they have played on his (Tinubu) long term ambition to be President and have built it into a sort of desperation and a crescendo that easily justifies this satanic resort to a Muslim-Muslim ticket. This is the calamity that has befallen my friend,” Babachir said.

He also wondered why Shetima, who he said is an “overambitious man who has a Machiavellian bent and has lots of money with which to procure a preferred-candidate status among Tinubu’s lapdogs”.

He said, “And as we are beginning to see, to also procure bogus supporters especially from among the Christian community to help launder his no-so-good image. But as a popular proverb goes: ‘Those whom the gods want to destroy they first make mad’. It appears that the gods want to destroy the APC and its Presidential Candidate and have chosen the instrumentality of the northern Moslem governors and their super ambitious tool and Kashim Ibrahim for this purpose.

“Alhaji Kashim Shetima is a Greek gift from the Northern governors to Tinubu. I advise Bola to make sure Kashima’s two hands are always in his plain sight and empty. Tinubu has made his choice. And I am sure he thinks he is ready for the outcome of that choice. He has chosen to bring religion to the front burner of Nigerian politics. And being a Muslim, he has chosen to take sides with his own religion. For all he cares, Christians can go to blazes with their votes” Babachir added.

He also said that Tinubu must also be told that there will consequences for this choice.

He said that some of them are that Christians all over the country will revolt against the APC to put the chances of his election in serious jeopardy.

He said the development will also put the election of all Christians standing for elections in Christian dominated areas in jeopardy.

He said, “This could result in APC being a minority party in both the National and State Houses of Assembly.

He added that a Muslim-Muslim ticket will drag down the whole APC members to the pit and should be rejected. (Daily Trust)