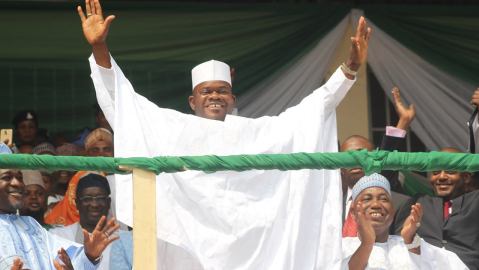 Sixteen of the candidates that participated in the Nov. 16 governorship election in Kogi have accepted the results of the election as announced by the Independent National Electoral Commission, INEC.

Addressing a news conference in Lokoja on Monday shortly after the announcement of the election results, the coalition of 16 candidates led by Dr. Sani Teidi, the candidate of the Young Democratic Party urged losers to work with the winner for accelerated development of the state.

“We congratulate His Excellency, Alhaji Yahaya Bello for the overwhelming victory at the poll and all those who participated in the election.

“We appeal to the winner to be magnanimous in victory and prepare to mend fences for an all-inclusive governance.

“We are also appealing to all Kogi stakeholders to accept the winner for participatory governance,” Teidi said.

The candidates condemned the call for cancellation of the election by civil society groups, saying that they did not consider the enormity of waste and loss of lives that may occur in the course of re-running the election.

“All aggrieved political parties should play the game by the rule. Kogi is our state, and the only panacea for development is peace,” he said.