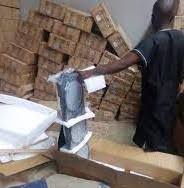 Mr. Uwemedimo Utip, an investment consultant, has announced that plans were underway to revamp Quality Ceramics Limited at the cost of N900 million.
Quality Ceramics Limited is sited at Ikot Ebom and Ikot Ikwere Itam, in Itu Local Government Area of Akwa Ibom State.
Utip, who is the Chief Executive Officer, Dimmo Investment and Manufacturing International Limited, made the announcement at a meeting in Itu, with the two host communities of Ikot Ebom and Ikot Ekwere, on Sunday.
He said: “We will spend the sum of N900 million in the whole process of revamping the Quality Ceramics Limited and the money is sourced 100 per cent from the private sector,” he said.
“My company, Dimmo Investment and Manufacturing international limited, is providing 75 per cent of that amount and the remaining 25 per cent is going to come from my partners,” Utip said.
READ ALSO: Police Arrest 16 Suspects Over Cultism, Recover Firearms, Ammunition
He told the communities that his firm had taken appreciable strides in ensuring that the gates of the company were opened for production activities soon, while soliciting the cooperation of the host communities towards the smooth revamping of the moribund ceramics firm.
Utip explained that the ongoing reactivation activities in the company would provide jobs for members of the two communities, especially youths that showcase the appropriate skills and competencies.
The Chief Executive Officer stated that the meeting was convened to allay misgivings and address speculations about the revamping efforts as peddled in certain quarters.
”The firm has already commenced the renovation and redesigning of the production areas. In addition, it has acquired a 500Kva generating set that would power production activities, while plans are underway to acquire an additional 750Kva generating plant and also water supply has been made available,” he said.
He lamented the poor road network around the company and the abysmal electricity supply in the area and appealed to the relevant authorities to come to the aid of the company.
In his response, Chief Okon Usanga, the village head, Ikot Ebom Itam, said that the coming of the firm was long overdue, describing the meeting as apt as the communities were fully briefed on the progress of the ongoing reactivation process.
He prayed for the speedy actualisation of the dream of the investor and also pledged the support and commitment of the people of Ikot Ebom Itam.
Chief Sunday Mathew, the Village Head of Ikot Ekwere Itam, applauded the investor for convening the meeting which, he also described as timely and re-assuring.
He urged the investor to carry the communities along in his plans to revive the ceramics company.
The Quality Ceramics Limited was once a thriving sanitary ware industry in the 1980s through to the mid 1990s, before it became moribund in the late 1990s. (NAN)