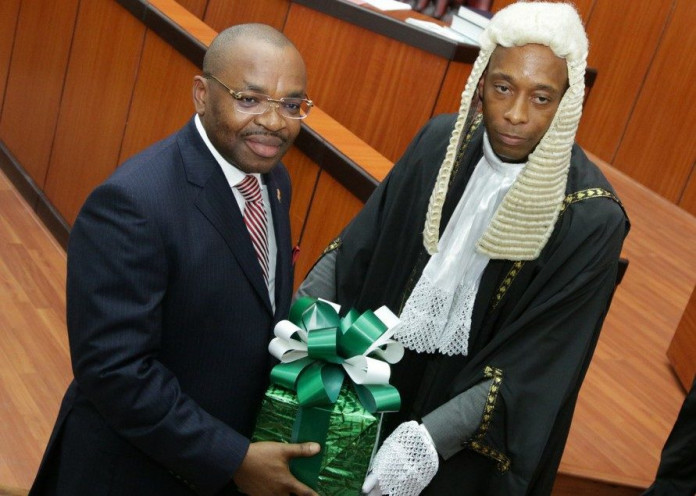 Gov. Udom Emmanuel, of Akwa Ibom, has proposed a budget of N670.718b christened “Budget of Industrialization for Poverty Alleviation” for the 2019 fiscal year.

The budget according to the governor is aimed at substantially implementing the five-point agenda of his administration which include Job creation, wealth creation, poverty alleviation, economic and political inclusion and infrastructural consolidation and expansion.

According to Emmanuel, “the policy thrust of the 2019 Budget is aimed at reducing dependence on statutory allocation as the main source of revenue to the State through the pursuit of establishing more industrial ventures, enhanced internal revenue generation and the attraction of more investments to Akwa Ibom State with the Five-point agenda of the administration still very much in focus.”

Speaker of the Akwa Ibom State House of Assembly, Onofiok Luke, disclosed this at a pre-budget briefing/public hearing organised by the House committee on Appropriations on the bill for a law to appropriate monies out of the consolidated revenue fund and capital development fund to the service of Akwa Ibom State government.

The public hearing took place at the old chapel of the Akwa Ibom State house of Assembly.

Luke while declaring the event open said that the public hearing was to allow Akwa Ibom people to contribute their quota to the 2019 budget.

Luke, who was represented by the deputy speaker, Felicia Bassey noted that the House of Assembly will always give opportunity for people to participate in any law that would affect the people of the State.

He also noted that the public hearing would allow every Akwa Ibom person to make inputs as well as observations in the budget as presented by Gov. Udom Emmanuel. He however charged the people to contribute meaningfully to the public hearing even as he promised that Akwa Ibom State House of Assembly will do the needful on the budget.

In his speech, the Chairman, House Committee on Appropriations and Finance, Usoro Akpanusoh said Akwa Ibom State operates an independent budget whose aim is to assist in short term planning and socio-economic management of the State and emphasised on the need for participation of the people in governance.

He disclosed that it has become a norm of the democratic governance that public hearing has to be organised on the issues that affect the generality of the people.

According to the committee Chairman, “This is predicated on one of the very important guiding principles of good governance which says that “what touches all should be approached by all.” The issue of public expenditure is the basis for political power and a subject that generates a lot of interest among politicians, legislators, public servants, labour and other unions, the business community.”

Akpanusoh assured that the process would ensure good governance, transparency and accountability and ultimately, a speedy and sustained development of the State in all sectors. He also assured the people of effective scrutiny of the budget proposals as well as monitor and supervise its implementation in the best interest of the State and its people, as part of the committee’s oversight function.

The Commissioner for Finance, LInus Nkang while explaining the policy trusts and objectives of the budget, said the 2019 budget will broaden the internal generated revenues of the State. He said next year’s budget will boast the production of local businesses in the State and that it will uplift so many things that will develop the State.

He explained that the budget will partner private partnership in the State and also ensure that security of life and property of Akwa Ibom State are protected.

Special Adviser to the Governor on Budget and Budgetary Planning, Nicolas Ekarika in his keynote address pointed out that the budget was prepared in the interest of Akwa Ibom people.

He appealed to the Akwa Ibom State House of Assembly to give the budget a speedy process by passing it into law as soon as possible in order to allow the implementation of the budget kick start as early as January next year.