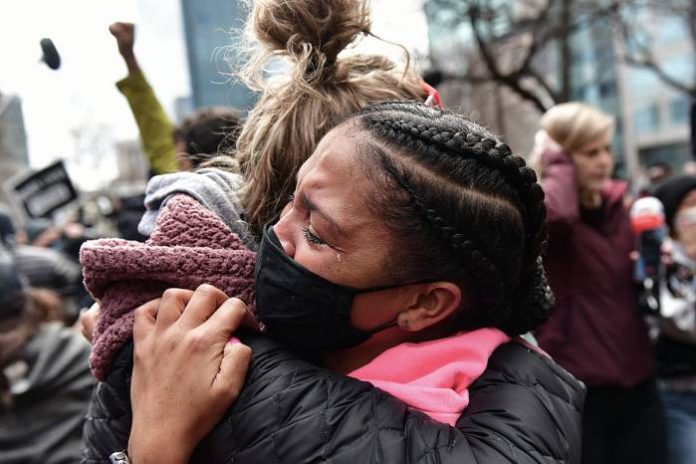 Derek Chauvin, the former U.S. police officer accused in the killing of George Floyd, has been found guilty on all three counts, Judge Peter Cahill said in Minneapolis on Tuesday.

The death of Floyd, a 46-year-old black man, in 2020 triggered a wave of demonstrations against racism and police violence in the U.S. in the middle of the coronavirus pandemic.

His exact sentence will be decided in eight weeks, the judge said.

Chauvin’s bail was revoked and he was handcuffed and led out of the courtroom after the jury’s verdict was announced.

Outside the courthouse, members of the public waiting for the outcome burst into tears at the guilty verdict.

The defence could still appeal.

Experts believe that Chauvin, 45, who has no prior convictions, will likely receive a lower sentence than the maximum allowed.

But the district attorney’s office could submit a request within a week for a higher sentence due to the gravity of the crime.

During the trial, prosecutors accused Chauvin of being responsible for Floyd’s death, while the defence pointed to Floyd’s bad health and drug residues in his blood.

The decision on Chauvin’s guilt or innocence fell to the 12-member jury, which had to reach a unanimous decision.

They had retired for deliberations on Monday afternoon.

The Floyd family’s lawyer, Ben Crump, called the verdict “a turning point in history” and said it sends a clear message on accountability in law enforcement.

“Justice for Black America is justice for all of America!” Crump tweeted.

Philonise Floyd, George Floyd’s brother, told reporters that “justice for George means freedom for all,” after the verdict.

“Today we are able to breathe again,” he said.

His brother’s repeated plea of “I can’t breathe” as he was pinned down has become a slogan against police violence and racism.

Hundreds of people celebrated in front of the courthouse, which was under stepped-up security measures.

National Guard soldiers were deployed to Minneapolis during the trial. Governor Tim Walz called for demonstrations to remain peaceful ahead of the verdict.

There was a festival atmosphere outside court, with chants of “Black Lives Matter” and George Floyd’s name, and traffic in the surrounding streets came to a standstill.

Floyd died on May 25, 2020, in Minneapolis after his arrest on suspicion of paying with a counterfeit 20-dollar-bill.

Police officers pushed him to the ground on the street and Chauvin kneeled on Floyd’s neck for eight minutes while Floyd begged to be able to breathe, according to footage of the arrest.

Floyd lost consciousness and instantly died, according to the autopsy.

Chauvin was expelled from the police force and later released on bail.

Three other former police officers involved in the operation are facing charges of aiding and abetting second-degree murder and second-degree manslaughter.

A separate trial has been set for them, to start on August 23.

Police reform legislation named for Floyd is pending in the U.S. Congress.

The Democrat-controlled House of Representatives has approved the bill, but the agreement of some Republicans would also be needed to get it through the Senate. (dpa/NAN)