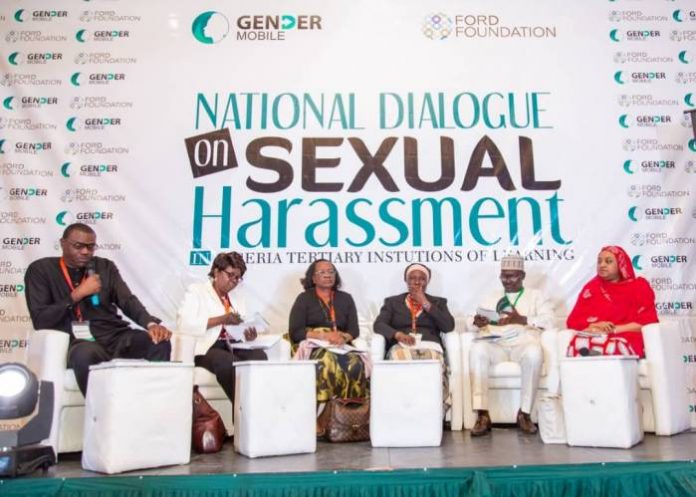 A Non-Government Organisation, Gender Mobile Initiative, has unveiled a mobile app for reporting sexual harassment and its prevention in tertiary institutions in the country.

Ms Omowumi Ogunrotimi, Founder and Executive Director of Gender Mobile, said at the unveiling of the app popularly known as ‘Campus Pal’ that 101 tertiary institutions had already tapped into the platform to expose randy lecturers.

Ogunrotimi said that the app was carefully built with support from Ford Foundation and partner agencies such as the Independent Corrupt Practices Commission (ICPC), National Orientation Agency (NOA), as well as National Association of Nigerian Students (NANS).

She noted that the diverse population, made up of students and academic staff in the tertiary institutions, was considered before creating the app (Campus Pal Mobile Platform).

“In the last three years, we have focused on environments of learning to address sexual harassment from a policy standpoint and through technology adoption.

“In 2019 the nation came to terms with the reality of the epidemic proportion of sexual harassment in our fine institutions.

“The BBC sex for grades video provided insight on emerging issues and we were confronted with critical questions such as what parameters should be used in determining behavior that constitutes sexual harassment?

“These posers informed the national convening of regulatory agencies/ICPC and other stakeholders where a policy framework was designed for institutions to use and develop their full anti-sexual harassment policy,” Ogunrotimi said.

She said that more needed to be done to ensure the desired result would be achieved.

Mrs Bisi Adeleye-Fayemi, wife of Ekiti State Governor, in her keynote address epressed displeasure that students were abused by lecturers whom they looked up to for guidance and mentoring.

“In October 2019, I attended the screening of the BBC Documentary, ‘Sex for Grades’, at the Sheraton Hotel in Lagos. I could not believe what I was watching.

“I laughed at the pitiful sight of a grown man bumping and grinding in front of a girl young enough to be his daughter, claiming to be praying for her.

“I cried when it turned out that the brave young woman who produced the documentary, Kiki Mordi, had to drop out of university on account of the sexual harassment she faced.

“I sat with my mouth open at the sight of ‘The Cold Room’, where young female students were taken to be ‘frozen’ by their lecturers.

“I was angry at the lack of respect for the young women and the absence of any sense of decorum by the male predators.

“However, I was also pleased that the dreadful culture of silence about sexual harassment in our higher institutions was finally being broken,” she said.

According to the governor’s wife, sexual harassment leads to decreased participation in class and general school activities as victims may seek to make themselves less visible just to escape the lecherous intent of predatory lecturers.

“In another study of sexual harassment in tertiary institutions, it was found that 69.8% of female respondents had been sexually harassed by male classmates and lecturers.

“Of this number 48.2% experienced physical sexual harassment, while 32.2% had requests to do something sexual in exchange for academic favours.

“In another study carried out on 200 lecturers and 200 students of tertiary institutions in Edo, it was shown that the majority of the respondents agreed that sexual harassment is prevalent in these institutions.

“It is instructive to note that there is considerable under-reporting of sexual harassment in colleges and universities.

“The imbalance of power between students, especially female students, and male teachers/professors in position of trust and authority contributes to the high rate of underreporting of this phenomenon.

“Because of this lack of trust, the victims are reluctant to report their victimisation.

“The implication is that more female victims of sexual harassment become disillusioned and lack a corresponding zest for learning, as it is believed that reporting such lecturers or abusers would be met with institutional hurdles that blame the victim and exonerate the accused,” Adeleye-Fayemi.

NANS President, Mr. Sunday Asefon, represented by Mr. Adeleye Olugbenga, said sexual harassment had for long threatened the peace in various tertiary institutions and that it was time to take the bull by the horn.

Asefon said that NANS was in the forefront of fighting sexual harassment and abuses in schools and would not stop now that it had gone digital. (NAN)