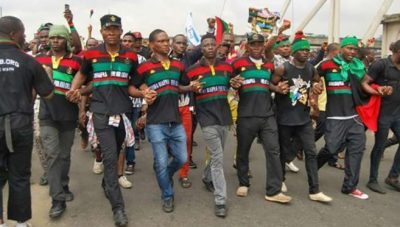 Justice Binta Nyako of the Federal High Court Abuja, on Monday, admitted four members of the Indigenous People of Biafra (IPOB) to bail in the sum of N10 million each.

Chimezie, Onwudiwe, Madubugwu and Nwawuisi, aged between 33  and 45, are facing three-count charge of conspiracy to commit treasonable felony and illegal possession of firearms.

They were all arrested in 2016 and had been in detention since then.

They were charged along with the former leader of IPOB, Nnamdi Kanu, who has not been seen since September 22, 2017.

Nyako in granting them bail, said she had carefully considered the consolidated application for bail submitted by their counsel and the number of years they had spent in prison custody.

She also made reference to the defendants health status as well as the ruling she had read of “a sister judge’’ as well as the Administration of Criminal Justice Act  (ACJA) 2015.

In considering their bail, Justice Nyako ordered the defendants to deposit monetary sum of N10 million each  with the Chief Registrar of the court.

She added that the defendants were not allowed to travel outside the country, that they were to deposit their travelling documents at the court as well.

The judge ordered that they were not to be seen in any gathering at any time or granting newsmen interviews or any type of interviews.

“No welcome `oyoyo’ gathering. If you do that, you will be sent back to prison. Go home, be with your family, come to court. The trial has commenced,” Nyako said.

At the prayer of the defence counsel, Mr. Ifeanyi Ejiofor, the judge ordered that the defendants report to the Commissioner of Police at their locality every two weeks, instead of Abuja.

She ordered the first defendant, Chimezie to report to the Commissioner of Police, Rivers.

Nyako also ordered the second defendant, Onwudiwe, and the fourth, Nwawuisdi, to both report to the Commissioner of Police, Enugu State.

She said the third, Benjamin Madubugwu, should report to the Commissioner of Police in Anambra.

Chimezie also pleaded the court to stop men of the state security from invading their residence after being admitted to bail.

Justice Nyako in response, assured them that they were under the custody of the court.

She adjourned the commencement of trial until November 14.