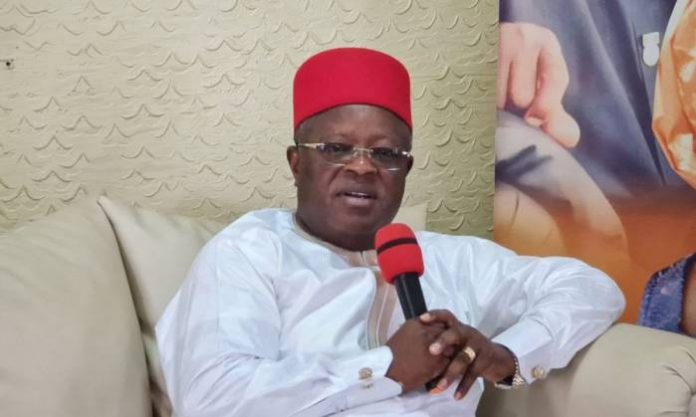 Gov David Umahi of Ebonyi has ordered the arrest of the state All Progressives Congress (APC) Chairman, Chief Stanley Okoro-Emegha and a party Chieftain, Chief Eni Chima over communal unrest.

The News Agency of Nigeria (NAN) reports that there was a supremacy battle between supporters of Okoro-Emegha and Chima, the House of Representatives candidate for Afikpo North/South federal constituency at Ekoli -Edda, Afikpo South LGA, on Dec. 26.

The battle led to the death of three persons and destruction of property worth millions of naira including Okoro-Emegha’s house.

The order of arrest was contained in a statement signed by Umahi”s Special Assistant on Media and Strategy, Mr. Chooks Oko and made available to newsmen on Tuesday.

Oko, in the statement, said that the govenor during an assessment tour of the area to determine the level of damages, expressed dismay at the unfortunate development.

The governor directed the state commissioner of police to arrest all those connected with the carnage and ensure they face justice.

The governor announced the suspension of all social gatherings in Edda until normalcy returns.

“He also urged the commissioner of police to deploy adequate security presence in the area to forestall further breakdown of law and order,” the statement read.

The governor’s aide remarked that the entire Ekoli-Edda has been cordoned by a combined team of the Police, Army and the Ebubeagu security outfit.

NAN recalls that the fatricidal Ezillo/ Ezza-Ezillo communal crisis in the state was equally caused by two major political gladiators from the area. (NAN)