The Federal Road Safety Corps (FRSC) on Sunday said it had prosecuted 10 truck drivers for driving unlatched articulated vehicles on Lagos highways during the month.

Mr Hyginus Omeje, the Lagos State Sector Commander of FRSC, told the News Agency of Nigeria (NAN) in Lagos that these were among the 52 truck drivers arrested by FRSC officials for various traffic offences.

Omeje said that they were prosecuted at the Lagos State Mobile Court following rampant cases of crashes recorded on the highways resulting from unlatched containers.

He said that the FRSC would intensify arrests and prosecutions of trucks found to be driving unlatched containers on the highways across the state.

According to Omeje, on July 13, the corps arrested 23 traffic offenders and all were prosecuted by the Lagos State Mobile Court.

“Three out of the 23 cases were on unlatched containers.

“Earlier on July 11 when we began to focus extensively on the activities of the operators alongside the special mobile court operations, 29 traffic offenders were arrested.

“Seven out of the  29 cases were as a result of unlatched containers; and four out of that seven were prosecuted,’’ he said.

“The FRSC is still committed to ensuring the safety of lives and properties on our roads.

“In recent times, there have been recurrent cases of containers falling from trucks while in motion, thereby, causing accidents and loss of lives.

“Consequently, we have started a special operation targeted at monitoring latched and unlatched containers again.

“You will recall that throughout 2016, we had a similar operation- “Operation Scorpion’’ – to address this issue of latched and unlatched containers.

“During that period, cases of unlatched containers constituting hazards reduced but it is like it is coming up again.’’

He said: “On Tuesday July 11, we commenced the special operation that will focus extensively on the activities of these operators; we also started special mobile court operations.

“Meanwhile, we have had a series of engagements with stakeholders.

“We have also met with the unions of these operators of trucks – the Association of Maritime Truck Owners (AMATO) and Association of Corporate Fleet Operators, to ensure their members adhere to safety standards.

“One of these safety standards is to ensure that when these trucks are loaded, they twist the lock underneath.

“As long as that twist is locked, if the truck wants to have a crash, then, the truck will have to fall as a whole and not the container slipping off.’’

The sector commander urged all road users to adhere to traffic rules and regulations.

“Accident will not inform anybody before its occurrence, so drivers must be very careful while on the road.

“Drivers should also be vigilant before and while overtaking trucks and articulated vehicles.

“These will go a long way in ensuring that we record minimal road crashes that result from unlatched containers,’’ Omeje said. 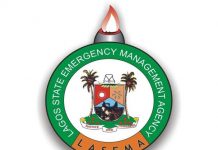