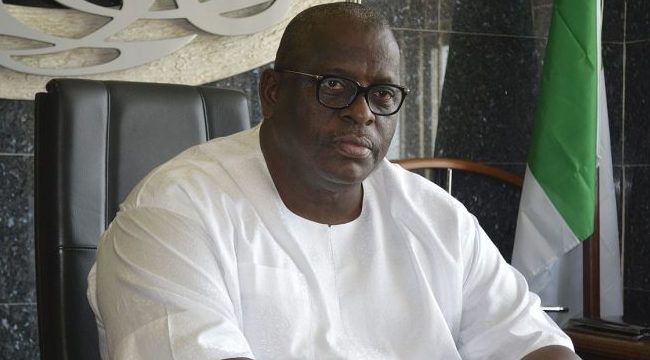 Justice Okon Abang of the Federal High Court Abuja, on Friday, fixed July 2, to deliver judgment in one of the two fresh suits instituted by Sen. Buruji Kashamu to stop the Federal Government from extraditing him to the U.S. for trial over an alleged drugs offence.

The judge, who was billed to deliver the verdict in the suit on June 20, said the judgment was not ready attributing the development to heavy workload he had.

Abang, however pushed the matter forward and promised that the court would now deliver its judgment on the new adjourned date.

The judge had on Thursday, June 20, fixed June 2, for hearing in the second fresh suit filed by the senator against his planned extradition by the federal government to face trial over alleged drug offence.

NAN reports that Kashamu instituted three new suits against the Attorney General of the Federation, AGF, and the National Drug Law Enforcement Agency, NDLEA, praying the court to stop the federal government and the NDLEA from arresting, detaining and extraditing him over the issue.

In the instant suit filed by his counsel, Mr. John Odubela, SAN, Kashamu argued that his fundamental rights to freedom and liberty would be breached with the plan to transport him to U.S. for the alleged offence if the AGF and NDLEA were not restrained from doing so.

He claimed in his originating summons that two staff of the NDLEA had alerted him of the move by the two respondents to give effect to the extradition request of the American government against him.

However, the AGF and NDLEA in their separate responses prayed the court to dismiss the suit on various grounds.

Among others, the AGF informed the court that the senator had been abusing court processes through filing of multiple suits on the same subject matter.

Counsel to AGF Mr. Gazali Tijani, told the court that the same plaintiff had in 2013 and 2014, instituted two different cases on the same issue against the Federal Government.

He added that judgments in the two suits were delivered in 2015 by a Federal High Court in Lagos.

Tijani, however, said that the two judgments of the high court delivered in 2015, were on May 4, 2018, voided and set aside by the Court of Appeal Lagos division.

The counsel informed the Judge that the senator had since approached the Supreme Court to challenge the decision of the Court of Appeal.

He, therefore, urged the court to dismiss the fresh suit on the ground that it constituted a gross abuse of court processes and lacking in merit because it did not disclose any cause of action.

But the NDLEA in its opposition to the fresh suit told the court that Kashamu was wanted in the USA because of the 6.6kg of heroin he allegedly imported into the country in 1994.

The Anti-Drug Law agency claimed that the Senator who represented Ogun East Senatorial District in the 8th Assembly, allegedly imported the hard drug into the USA.

“In his capacity as the head of a large drug smuggling syndicate operating in Africa, Asia, Europe and America at the period,” the NDLEA said.

In a fresh 54-paragraph counter affidavit filed at the court to oppose the innocence of the Senator, the NDLEA averred that Kashamu was indicted for hard drug offences in the USA.

“But he escaped while his alleged co-offenders were arrested, prosecuted and sentenced to various terms of imprisonment in America.

“The affidavit deposed to by one Shehu Mohammed, a litigation officer with NDLEA and cited in Court explains that following Kashamu’s escape, the USA government in 2015 dispatched to Nigerian government a request for his extradition,” the NDLEA further said.

NDLEA insisted that there was a valid and subsisting indictment against him in the United State’s District of Illinois, Eastern Division supported also with valid order for the arrest of the serving senator.

The affidavit read in part “The applicant Mr. Buruji Kashamu, is alleged to have violated Narcotic Laws of the USA by conspiring to import heroin into the country.

“Heroin is a schedule 1 narcotic controlled substance under the laws of the USA.

“There is valid and subsisting indictment against the applicant, Buruji Kashamu in the United States’ District of Illinois, Eastern Division.

“On March 16, 1994, the applicant was charged in the USA/Buruji Kashamu, among others No. 94 CR 172 following the seizure of 6.6 Kilogrammes of heroin alleged to emanate from him.

“The applicant Buruji Kashamu was further charged with a second superseding indictment filed on May 21, 1998, for conspiracy to import heroin into USA, following repeated seizures of heroin similarly alleged to be emanating from him.

“A copy of the second superseding indictment and Arrest warrant for the fugitive issued by the United States District Court, Northern District of Illinois is contained in Exhibit NDLEA 1.

“That contrary to his depositions, the applicant has never been exonerated of any drug or related offence by any court of Nigeria, the United States of America (USA) of the United Kingdom (UK).

“That the paragraphs of the applicant’s affidavit that talk of exoneration of crime/charges of illicit traffic in narcotic drugs are false.

“That contrary to his depositions, the decision of the British Courts did not exonerate the applicant of any of the charges for drugs and related offences pending in the USA.

“That the two judgments of the British Courts were decided on technicalities based on the laws of the UK.

“They did not go into the merits of the extradition charges relating to conspiracy and illicit traffic in narcotic drugs in the USA.

“That contrary to his depositions, the two magistrates of both the Metropolitan and Bow Street found as of fact that extraditable offences have been committed to justify the extradition of the applicant.

“That the claims of the applicant are unsubstantiated and should be dismissed with substantial cost,” the NDLEA said.

However, NDLEA urged the court to dismiss the fresh suit on the ground that it constituted gross abuse of court process with falsification of facts in the judgments by London and American Courts.

News Agency of Nigeria, NAN, reports that Abang, sitting at the Lagos division of the Federal High Court, had in 2015, in two separate judgments, barred the Federal Government from extraditing Kashamu.

The two judgments were however on May 4, quashed and set aside by the Court of Appeal on the ground that they were based on hearsay evidence and suppression of facts by Kashamu.

The Senator has since approached the Supreme Court to challenge the decision of the Court of Appeal which cleared the coast for the Federal Government to extradite him to the U. S.