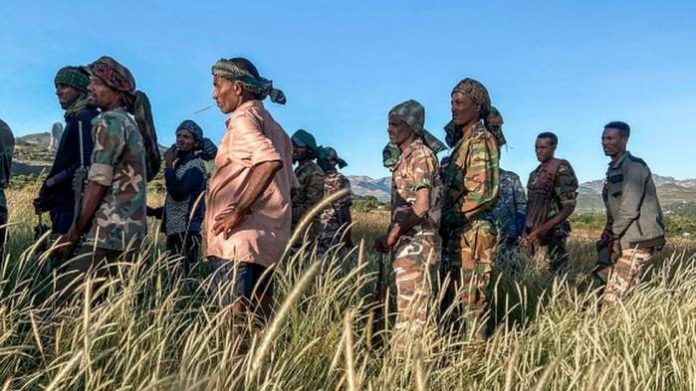 The main hospital in the capital of Ethiopia’s northern region of Tigray is “dangerously low” on supplies as it treats the wounded from the fighting around the city, the Red Cross says.

On Saturday, Prime Minister Abiy Ahmed had said that federal forces had taken control of the city.

He described it as the “last phase” in the three-week long fight with the Tigray People’s Liberation Front.

But the TPLF leader vowed to fight on, in a statement to Reuters.

Few details have emerged from Tigray throughout the fighting as communications have been cut.

The statement from the International Committee of the Red Cross (ICRC) provides a rare insight into events on the ground during the conflict – in which hundreds have reportedly died and tens of thousands have fled their homes.

What does the Red Cross say?

The ICRC said the Ethiopian Red Cross ambulances had taken “injured and deceased people” to the Ayder Referral Hospital.

On a visit to the hospital, ICRC staff found “80% of patients to be suffering from trauma injuries” adding that other services had to be suspended “so that limited staff and resources could be devoted to emergency medical care”.

The hospital is also running low on body bags for the deceased, the Geneva-based organisation said.

READ ALSO: How My Father’s Killers Captured Him In Toilet After Heavy Gunshots – Son Of Assassinated Nasarawa APC Chair

The ICRC, however, did not give any figures for the numbers injured or dead. Neither did it say whether the victims were civilians or military personnel.

What does the government say?

In a statement on Twitter on Saturday, Mr. Abiy said the army was in full control of Mekelle and that this “marks the completion of the [military’s] last phase”.

“I am pleased to share that we have completed and ceased the military operations in the Tigray region,” he said.

He added that the army had released thousands of soldiers taken by the TPLF and was in control of the airport and regional offices, saying that the operation had been carried out with “due care for citizens”.

The prime minister has consistently described the TPLF leadership as a “criminal clique” and said that the police will “bring them to the court of law”.

In a text message to Reuters, TPLF leader Debretsion Gebremichael did not directly comment on the situation on the ground, but said of the government forces: “Their brutality can only add [to] our resolve to fight these invaders to the last.”

He added: “This is about defending our right to self-determination.”

A TPLF statement read out on regional Tigray TV said: “Fascistic bombings have caused civilian deaths and injuries. The Tigray government has vowed that it would take retaliatory actions against the barbaric bombings”.

Analysts say the TPLF could now be preparing to return to the mountains to launch a guerrilla war against the federal government.