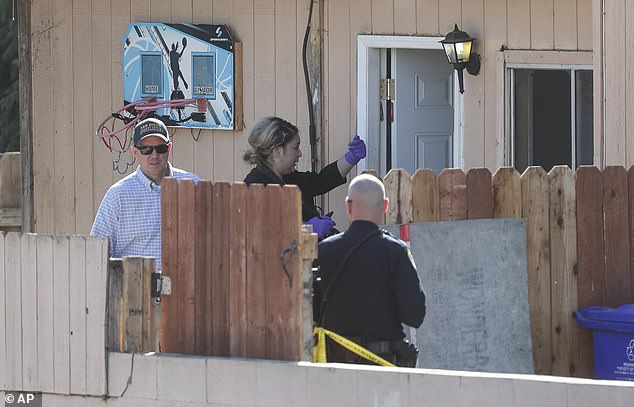 California authorities said a man fatally shot his wife, three of their children – leaving a fourth in surgery – and then himself, less than 24 hours after she’d obtained a restraining order against him.

The San Diego Police Department said the shooting occurred in Flintridge Drive in the Paradise Hills neighborhood of San Diego, California, Saturday morning, according to Fox 5.

Authorities said that the man – the woman’s estranged husband – fatally shot her and three of their sons – ages three, five and nine – before turning the gun on himself. The man was also said to have shot their eldest son, 11, who was taken to surgery.

Police said 11 year old was said to be in critical condition as of Saturday afternoon, according to NBC San Diego.

Police told Fox 5 they received a call at 6.49am Saturday, but nobody spoke to the dispatcher. Arguing could be heard in the background.

Police said that a second 911 call was made by a neighboring relative, who was calling to report the arguing and what apparently sounded like a nail gun being fired within the home.

When officers arrived, nobody answered the door.

Officers then looked through the window and saw a child covered in blood, prompting them to break into the property.

Inside, they found the five people who had been shot.

The three-year-old son, man and woman had died at the scene of the horrific shooting, while the five and nine-year-old children died in hospital.

SDPD Lt. Matt Dobbs told reporters that the incident ‘appears to be a tragic case of domestic violence, murder-suicide.’

Dobbs said that investigators believed that ‘the male came over this morning, there was some kind of argument or disagreement and he used a hand gun and shot his family before turning the gun upon himself.’

Police said the shooting occurred less than 24 hours after the 29-year-old woman got a restraining order against her estranged husband, according to the New York Times.

Police said during a press conference Saturday that officers had responded to the Flintridge Drive address earlier in November, where they found the estranged couple arguing over a set of tools.

The man was said to have been asking the woman for the tools, but left when police arrived. Police then said that they gave the woman information on how to file a restraining order.

Police said that the woman appeared to have secured her restraining order on Friday and that the man knew that she had done so before carrying out the murder-suicide.

It’s unclear if the restraining order had been served against the man, however.

Police said that the man is the only suspect in the case and they are not looking for anyone else in connection with the shooting.