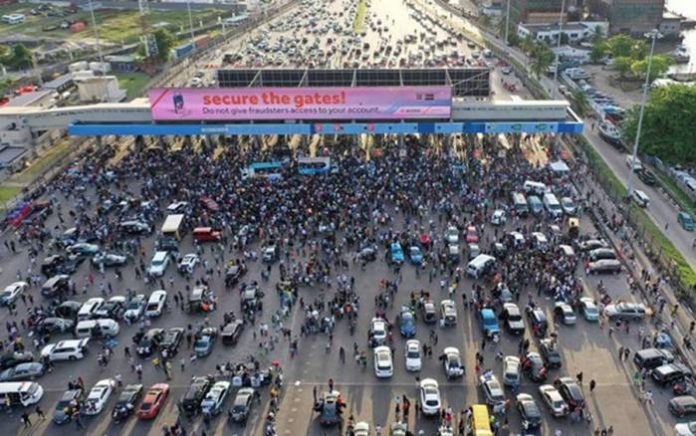 A surgeon, Babajide Lawwon, has revealed that a number of gunshot victims numbering among #EndSARS protesters were treated at Reddington Hospital on the night of October 20.

Lawson, a trauma and orthopaedic doctor, made this disclosure on Saturday; while testifying before the Lagos State Judicial Panel.

According to a report by 1st News, October 20, 2020, marked the day of the alleged shooting of unarmed #EndSARS at Lekki Toll-Gate. It was reported that soldiers had opened fire on #EndSARS protesters; calling for an end to police brutality at the Lekki toll gate plaza on that night. In the aftermath of the incident, the Nigerian government and military have insisted no civilian was shot at; despite evidence to the contrary.

Lawson disclosed that standard medical protocols to be followed in such circumstances is for the police to be invited and for the pellets to be handed over to them. Nevertheless, the doctor, who said he did not personally extract any bullet, revealed that the hospital saw a large number of patients on the night that soldiers opened fire on the #EndSARS protesters.

Further, he revealed that the number of persons brought to the hospital on the night was huge; adding that staff at the Lekki and Victoria Island branches were overwhelmed. He described it as a mass gathering; even as he admitted that the hospital may have been unable to capture the records of all the patients who presented themselves for treatment.

Lawson testified he personally treated six of the patients that night. Further, he said that from the next day, the number of patients tripled; stating that he had to keep shuttling between the hospital’s Victoria Island branch where he was stationed and the Lekki facility to help out.

“Being in charge of trauma means anybody that is involved in any form of traumatic injury; accident, gunshot and others will have to go through me first. I saw a couple of them, the ones that needed admission, I admitted and the ones that did not were taken care of.

“On the first night, there were about six patients that I saw, subsequently, other patients came, trickled in, as days continued.”

Under cross-examination by a lawyer to some of the victims of the shooting; Lawson faced questions on whether he authored any of the medical reports tendered to the panel, among others; as the lawyer claimed that the records of a particular victim who presented himself for treatment, was not among those captured.

Lawson said: “On the night of this event, in the Lekki facility, when patients were brought in; it was a mass gathering situation in which case you have a large number of people presenting at the same time, literarily overwhelming the facility.

“In that kind of situation, there are lots of cases that might be compromised. If this patient says he was treated at the hospital, he can present at the hospital and get a medical report.”

Also, he was asked whether the hospital extracted pellets from the patients as there were many cases of gunshots; especially that of Nnaji Mabel who had a pellet in her abdomen.

In his response, Lawson said: “As indicated in the report, we did not extract the pellet. I admitted the responsibility. We reviewed her CT and records. We determined that she did not need anything extensive…She was treated and allowed to go.”

‘‘If there is a gunshot injury and the bullet does not in any way endanger the body, the pellet can remain.”

In addition, he explained that if some pellets were removed; they would be handed to the police in accordance with medical protocols.

“In normal process, protocol is that if there is a gunshot injury and extracted the bullet; the police will have to come and the bullet be handed over. For the patients I treated, I did not extract any bullet; the patient that had pellet did not require a removal.”

Meanwhile, the Nigerian Army has shunned further appearance at the panel, without giving any reason.