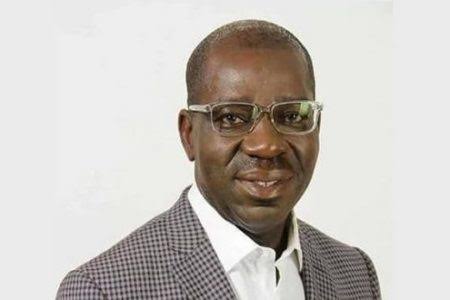 National Chairman of the Peoples Democratic Party (PDP), Uche Secondus, and former Governor, of Anambra, Peter Obi, have congratulated Gov. Godwin Obaseki on his re-election at the just concluded governorship election in Edo State.
Secondus, in a statement issued by his Media Adviser, Ike Abonyi, in Abuja on Sunday, also congratulated the Deputy Governor, Philip Shuaibu.

He described the PDP’s victory as a clear affirmation and demonstration of the people’s goodwill in appreciation of the outstanding performance of the governor and his deputy in their first term.

Secondus, urged the winners to observe all the tenets of democracy and rule of law in the course of discharging their duties in the state.

He also commeded Edo people for standing up for democracy through their determination to ensure that the will of the people prevailed in their state.

The PDP National chairman also noted that the Independent National Electoral Commission (INEC) and the various security operatives significantly played by the rules which he said reflected in the limited number of electoral cases.

Secondus, who said that the Saturday governorship election was far better than any previous elections under the All Progressives Congress (APC) administration, urged President Muhammadu Buhari to continue to deepen democracy in the same way.

“We are standing on the euphoria of this to urge the President to sign the amended Electoral Act into law and carry out further electoral reforms that will engender peace and less interference in our electoral process.

“Also, we salute the gallantry of the APC, and its candidate, Pastor Osagie Ize-Iyamu, for providing healthy challenges,” Secondus stated.

The PDP national chairman also commended the international community for their interests in the country’s democracy, urging them not to relent to endure the people’s will continues to prevail in all electoral circumstances.

He commended PDP members across the nation for their support, particularly the chairman and members of the party’s National Campaign Council, Gov. Nysom Wike of Rivers state, Forum of PDP Governors, members of the Board of Trustees, members of the National Working Committee, and civil society groups.

For Mr. Obi, Saturday’s victory by Obaseki was deserving and a true reflection and wish of the good people of Edo State.

Obi, in a statement issued by his Media Adviser, Valentine Obienyem, on Sunday, noted that he saw the victory coming, given the good record of performance of Gov Obaseki in his first term.

“Democracy is when the people are allowed to determine who leads them after weighing the records of the candidates,” Obi said.

He urged Obaseki and his deputy to see their victory as a catalyst to do more for their people.
He also commended INEC and others who played roles in the election for playing by the rules, urging them to continue in the direction for sake of peace in Nigeria.