The Presidential candidate of the Peoples Democratic Party in last general elections, who made his views known via in his verified tweeter handle on Thursday, urged the forces behind the ugly events to reign in their proxies, and abide by the rule of law to allow the people elect who they wanted to govern them.

He noted that without the rule of law, there will be no rule at all.

The tweet read: “Nigeria has been on the edge due to the brinkmanship of those charged with the constitutional leadership. 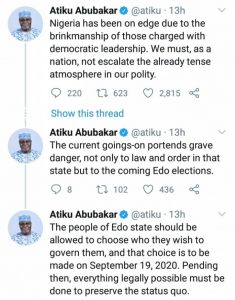 “We must, as a nation, not escalate the already tense atmosphere in our polity.
“What is happening in Edo is a threat to constitutional order nationwide.

“I strongly urge belligerent forces to reign in their proxies, and abide by the rule of law.

“As I have previously said, without the rule of law, there will be no rule at all.

“The current goings-on portend grave danger, not only to law and order in that state, but to the coming Edo elections.

“The people of Edo should be allowed to choose who they wish to govern them, and that choice is to be made on Sept. 19.

“Pending then, everything legally possible must be done to preserve the status quo.”